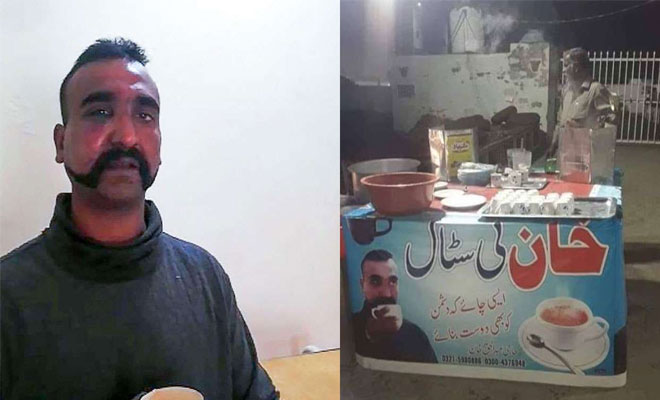 It’s obvious that all the products and services in a market demand some extent of marketing strategies for an improved sale and to gain the targeted market, merchandisers use their USPs (Unique Selling Point) designed in a manner to achieve desired objectives.

A good marketing strategy does not necessarily require spending hefty sum of money but it is all about the good and unique ideas that make the difference. A not-much-literate tea seller of Karachi has all in his mind how to earn good by making an attention grabbing strategy for selling his tea.

The tea seller displayed a banner of the iconic tea sipping pose of the Indian Air Force wing commander Abhinandan. The idea truly garnered appreciation for the Chaiwala on both sides of border.

A twitterati posted the picture of the tea stall and within a couple of hours it took the social media with a storm.

This Pakistani uncle has got some serious marketing skills. The small roadside tea stall has a banner with the following text: 'Khan's Tea Stall – A tea that makes foes turn into friends' with the image of Indian Air Force pilot #Abhinandan – #IAF pic.twitter.com/ldQVG6brI7

Lmao and ABhiNoneDone got free publicity :p and chai too 😂

Haha…..It means Indian pilot has become the symbol of tea in Pakistan.

Last month, Wing Commander Abhinandan Varthaman was captured by Pakistan Army after his fighter jet was shot down in Azad Jammu and Kashmir upon violation of the Line of Control (LoC). The Pakistani armed forces treated him well and later he returned to India as a ‘gesture of peace’ after airstrikes between the two countries.