The open letter has been addressed to all the higher ups including PM Imran Khan. 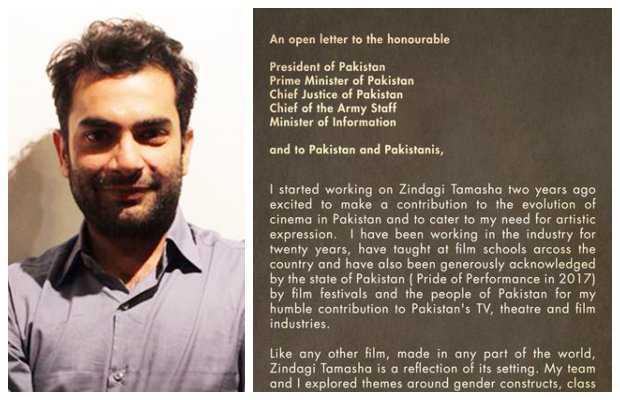 The open letter has been addressed to PM Imran Khan, President and other government officials - OyeYeah News
1Share
130Views

Filmmaker Sarmad Khoosat has written an open letter on Thursday, seeking to draw his attention towards the hurdles that are being created in the release of his upcoming flick “Zindagi Tamasha.”

The open letter has been addressed to PM Imran Khan, President, Chief Justice, Chief of Army Staff, Information Minister and the chairman censor board.

This clearly shows how frustrated the director feels as there are a lot of hindrances faced by the production team to release the Zindagi Tamasha in the country which has already won a couple of honors at international levels.

Though the release date for Zindagi Tamasha was set for 24th Jan, in his letter Sarmad Khoosat reveals that a complaint was registered against the writer, producer, and director after the release of the film’s trailer.

“24th of January was set as the release date. However, a ‘complaint’ was registered against the writer, the producer and myself, based on assumptions made from the two-and-a-half-minute long trailer,” he wrote.

“as a law-abiding citizen and with full conviction that there is nothing offensive or malicious in the film, in response I submitted the film for another review to the censor board. It was cleared once again with a few cuts to appease the complainants. I launched the promotional campaign and now, just a week before the film’s release, another attempt is being made by some group to stop the release of the film and this time they are hell-bent on using pressurizing tactics”, he further added.

“I am bringing this to your notice not just because my team and I are being bullied and pressurised but also because this series of episodes undermines a state institution like the Central Board of Film Censors and strips it of its authority and stature. The space for rational and artistic thinking and expression must not be annexed by a few troublemakers for their political ends but I fear this is what will happen if we buckle under this time. Sincerely, Sarmad Sultan Khoosat”, concluded the film director.