The mythology of U-turn in Naya Pakistan 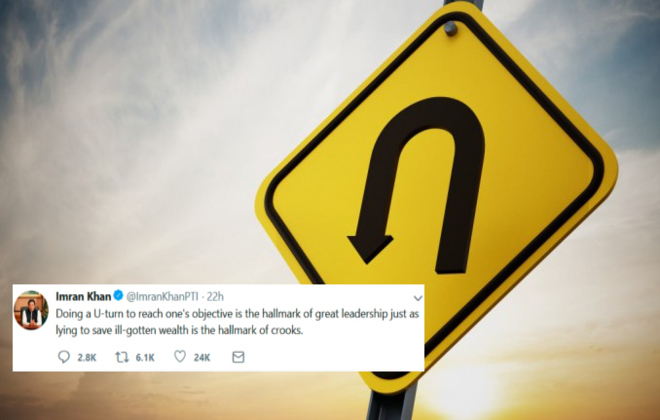 The abstract for road safety and driving rules says, U-turn is a complex driving manoeuvre entailing 180-degree turn to change the direction of travel towards the opposite direction.

But the term has been driving the nation frenzy everywhere, including the social media. U-turn has become one of the most popular political terminology or better say a has become colloquial term. It all started with the struggle to create Naya Pakistan.

Prime minister of Pakistan, after being mocked by his critics for his remarks about the U-turns he had taken in his political career, came on social media defending his stance about the U-Turn.

Mr. PM did not mention any name or leader in his tweet, to whom he was directing his statement. But, the clarification of the U-turn was more than enough to make rounds on social media.

The statement had drawn criticism from various fronts. And here is how the U-turn being mocked on social media:

ARE WE INVADING RUSSIA IN THE WINTER????? https://t.co/wlXXo6eAlD

Fair enough. But I have a feeling the PM will take a u-turn on this statement as well. A u-turn on a statement about u-turns. That would be classic IK. pic.twitter.com/uhSnvJa49e

The real U Turn speech: “You turn if you want to. The lady is not for turning” #MargaretThatcherClassic pic.twitter.com/8XPQat74uU

Funny thing is without understanding the context in which PM Imran Khan talked of "U Turn", all PTI is sitting on TV shows & giving all kinds of stupid explanations. This is literally a Media Circus at its best – at a time when enemies of Pakistan have launched 5th Gen.War on us

Simply amazing! His next Uturn will be:

"On route to creating Madina Ki Riyasat in Pakistan, I took a Uturn and recognised Israel because it is the hallmark of my Leadership qualities."

The historic moment when Adolf Hitler realized the blunder he has made by not taking a UTurn.

I want to reshoot every single shot of the film again. True director is who cant plan but shoots and then reshoots. #uturn

Please wake me Up, when obsession with U tUrn is over.
🙏🏽

However, few government officials have come forward in support of the PM’s statement:

"U Turn" is Evaluation. It is Assessment, Rating, Estimation, Ranking, Weighing up, Consideration, Analysis.
Proper evaluation of results (whether to take a U Turn or not) is crucial. There is a huge difference between "A U Turn" and "A Blatant Lie"

tweet
Share on FacebookShare on TwitterShare on PinterestShare on Reddit
Saman SiddiquiNovember 19, 2018
the authorSaman Siddiqui
Saman Siddiqui, A freelance journalist with a Master’s Degree in Mass Communication and MS in Peace and Conflict Studies. Associated with the media industry since 2006. Experience in various capacities including Program Host, Researcher, News Producer, Documentary Making, Voice Over, Content Writing Copy Editing, and Blogging, and currently associated with OyeYeah since 2018, working as an Editor.
All posts bySaman Siddiqui