Counting of votes across 17 districts underway 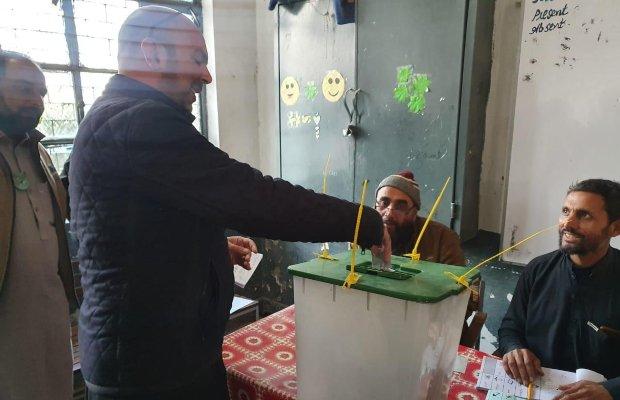 Counting of votes across 17 districts is underway at the KP LG polls that have been marred with violence and rigging allegations!

Sunday saw a number of incidents of violence, including a gun attack on a polling station in Karak, during the local government polls in 17 Khyber Pakhtunkhwa (KP) districts and left at least two people dead.

The violent incident prompted the Election Commission of Pakistan (ECP) to postpone polling in some areas.

Polling was held in the 17 districts today, including Peshawar, Charsadda, Nowshehra, Mardan, and Peshawar, marked the first phase of the local body polls, with the next phase to take place at a later date.

Earlier in the day, unidentified people opened fire at a polling station killing two people and wounding four in the Karak districts’ Faqir Khel area. The firing disrupted the polling process. Additional police and FC contingents have arrived in the area.

While in the Zakka Khel district area, political activists fired gunshots at a polling station which was also vandalized.

Another incident was reported from Bajaur’s Salarzai Tehsil where gunmen opened fire at a Mulla Syed polling station leaving one person injured. The polling was stopped after the violence.

The election for the fifth mayoral seat from Dera Ismail Khan was postponed on Saturday after an ANP candidate Umar Khattab Sherani was shot dead by unidentified gunmen.

Around 37,000 candidates are running for 700 vie for the 4 mayoral and 60 Tehsil chairman seats the local government polls.

According to the Election Commission of Pakistan (ECP), 12.66 million voters are registered across the 17 districts, with 7.015 million male voters and 5.653 million female voters.

tweet
Share on FacebookShare on TwitterShare on PinterestShare on Reddit
Saman SiddiquiDecember 19, 2021
the authorSaman Siddiqui
Saman Siddiqui, A freelance journalist with a Master’s Degree in Mass Communication and MS in Peace and Conflict Studies. Associated with the media industry since 2006. Experience in various capacities including Program Host, Researcher, News Producer, Documentary Making, Voice Over, Content Writing Copy Editing, and Blogging, and currently associated with OyeYeah since 2018, working as an Editor.
All posts bySaman Siddiqui