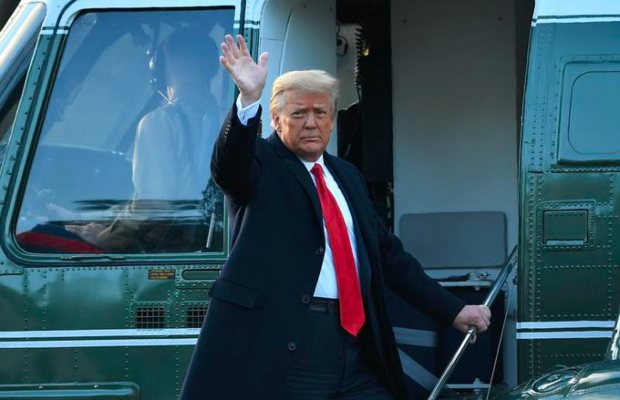 Donald Trump and first lady Melania Trump departed the White House in Washington, DC, on January 20, 2021, last time as 45th US president ahead of President-elect Biden’s inauguration. And the internet has a lot to say!

After leaving the  White House, Trump addressed his supporters at Andrews Air Force Base for the final time as the 45th president before taking off for his Mar-a-Lago Florida resort.

Trump who has skipped Bidden’s inauguration ceremony, according to a White House spokesman has confirmed that the departing president has left his successor a letter.

Donald Trump leaves the White House and addresses his supporters at Andrews Air Force Base for the final time as the 45th president before taking off for his Mar-a-Lago Florida Resort. pic.twitter.com/j51CFlhHSt

In the final hours of his presidency, Trump pardoned 73 people, including his former adviser Steve Bannon and issued 70 commutations in a final wave of executive clemency grants before leaving the office.

As being reported Trump and close aides, including his daughter Ivanka and son-in-law, Jared Kushner, drew up the list during a Sunday meeting in the Oval Office.

The now-former president who had been locked out of Twitter is being ridiculed at the microblogging site by the thousands of Americans and people around the world:

The White House is now being deep cleaned. I’m not joking.

Trump has left the White House and America is better because of it.

I cried when @BarackObama got on that helicopter. I actually punched the air and cheered when 45 just did. #TrumpsLastDay pic.twitter.com/OFoZSIuUq1

The last two Republican presidents got to the White House after losing the popular vote, but acted like they had a mandate.

Biden actually has one, and the Democrats should absolutely act like it. https://t.co/p7XnzZVBur