Arnab Goswami been accused by the critics for using anti-Pakistan melodrama to hit for ratings, instead of reporting on facts and staying neutral. 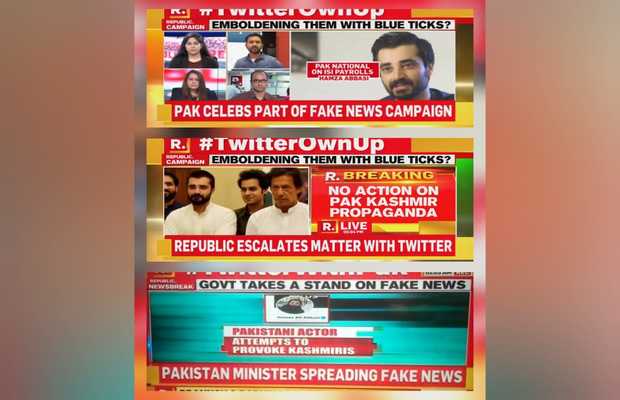 Pakistani actor and anchor Hamza Ali Abbasi hits back at Indian journalist Arnab Goswami, claiming that he was an ISI agent.

Indian journalist Arnab Goswami who is well known for being notorious for his anti-Pakistan stance, in his recent news show hit Pakistani actor Hamza Ali Abbasi and labeling him as an ‘undercover ISI agent’.

Hamza Ali Abbasi who is also an active social media user and keeps sharing his views over political and social issues did not let the matter slide away.

In a counter tweet, Hamza responded back to the Indian anchor, saying that he proudly considered himself as an ISI agent along with 200 million other Pakistanis.

Hamza Ali Abbasi wrote: “So that over actor & warmongering for rating guy Arnab/his channel declared me an undercover ISI agent! Let me clarify, I am not an “undercover” ISI agent, I am very openly/proudly an ISI agent, just like more than 200 million Pakistanis are proud ISI agents! #15thAugustBlackDay”.

Quoting his previous tweet, Hamza further said that “I always thought maybe I will not see a free Kashmir in my lifetime but seeing 1 blunder after another of Modi’s fascist regime & the delusional propaganda their fascist media outlets are spreading, I am now very confident that Insha Allah I will see a #FreeKashmir very soon”.

It is not the first time, Arnab Goswami been accused by the critics for using anti-Pakistan melodrama to hit for ratings, instead of reporting on facts and staying neutral.