IBA under criticism for expelling student who exposed harassment on campus 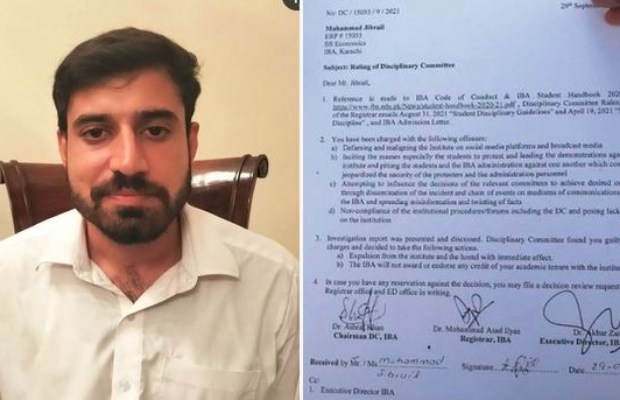 IBA is under criticism for expelling a student who exposed harassment on campus!

The Institute of Business Administration (IBA) Karachi expelled, Mohammad Gibrail, a student who exposed an alleged harassment incident at the campus.

According to the statement issued by the institute, the IBA’s Disciplinary Committee took action against Mohammad Gibrail for posting about the incident on social media instead of using the “right channels” to report it.

However, the decision provoked a strong reaction on social media with an outpouring of support for Gibrail who was just a few weeks behind obtaining his degree.

Activist Jibran Nasir in a tweet on Friday has shared the latest development of the case.

According to him, “Jibrael has officially filed an appeal with @EDIBAKarachi earlier today and has been given time for Tuesday. Jibrael besides appealing his expulsion has sought effective inquiry in a harassment complaint, reforms within #IBA DC/AHC & lifting of unreasonable restrictions on students.”

Here is the relief sought by Jibrail in the appeal filed by him with the office of @EDIBAKarachi. He has been informed that his appeal will be heard on Tuesday. Jibrail isn't just seeking withdrawal of his expulsion order but necessary reforms for a safer environment at #IBA. pic.twitter.com/CF9tPJJor7

Amongst many social media users, a few celebrities also came forward voicing their support for Jibrael.

PPP leader and member of Sindh Assembly, Sharmila Faruqui in a tweet said: “Jibrael from Lakki marwat expelled from @ibakarachi for exposing a male staff harassing female staff. His crime was to speak against injustice & women’s rights. Disgusted & appalled by this action by #IBAKarachi.”

Jibrael from Lakki marwat expelled from @ibakarachi for exposing a male staff harassing a female staff. His crime was to speak against injustice & women’s right. Disgusted & appalled by this action by #IBAKarachi pic.twitter.com/B1YSHMBIiW

“Shame on you guys,” wrote Aiman Khan on her Instagram Story this Thursday, registering her protest. IBA Karachi has invited protests from the public after expelling a final year student:

More power to Jibrail who stood against the harrasment he saw take place at #IBAKarachi. He was asked to accept that he commited a mistake by reporting the incident on social media, to apologize for damaging IBA's reputation, and to drop the charges against the accused. (1/2) pic.twitter.com/Rl9A379MSL

You know your "disciplinary decision" lacks merit when it needs to be "explained" with this long a statement which despite its verbosity makes for little actual sense. #IBAkarachi

Shamefull Act by Admnistrtion of IBA…
He was one of the most obedient and the man of his words whom I have seen in my college life..#IBAkarachi pic.twitter.com/C1UhEqKZuL