Imran Khan said that he never approved of Russia's invasion of Ukraine, adding that "we have nothing to do with it." 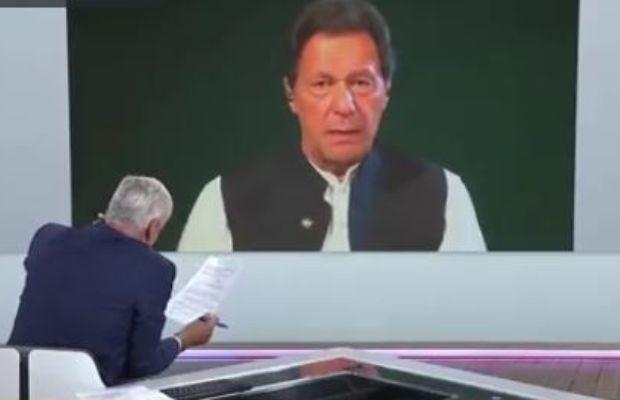 In the latest, former prime minister Imran Khan has defended Moscow’s visit in a virtual interview on the Sky News.

In an exclusive interview with the British television news channel, PTI chairman Imran Khan got enraged when he was asked about his visit to Russia.

Former PM stated, “How the hell was I supposed to know Putin would invade Ukraine?”

Imran Khan said that he never approved of Russia’s invasion of Ukraine, adding that “we have nothing to do with it.”

Sky News host Mark Austin in another question regarding the Taliban’s recent law on women, asked: “What about the enslavement of women, Imran? Are you concerned that the Taliban appear to be reneging on their promise to allow girls to return to school and are now demanding that women cover their faces? Are you concerned about what is occurring there?”

Imran Khan replied, “Mark, I am neither responsible nor a Taliban spokesperson.”

PTI chairman said that if there was a solution after 20 years of war, it should have been found.

The host made claims that Pakistan has backed the Taliban and that Taliban fighters are being harbored by Pakistan, to which Khan inquired, “How?”

Imran Khan asserted that there is excessive propaganda against Pakistan.

'How the hell was I supposed to know Putin was going to go into Ukraine?'

Former Pakistan prime minister Imran Khan says he never endorsed Russia's invasion of Ukraine adding, "we had nothing to do with it."

No one knew that Former Prime Minister Imran Khan’s long-planned February 23-24 visit to Moscow, the first official state visit by a Pakistani head of government in two decades, would become a risky gambit.