“Pakistani PM conducted that trip as part of his foreign policy”, Bilawal Bhutto 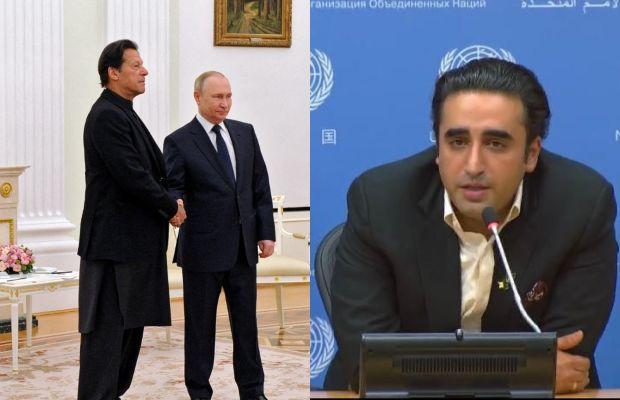 Responding to the question, Bilawal Bhutto said, “As far as the former PM’s trip to Russia [is concerned], I would absolutely defend him,” adding that, “[the] Pakistani PM conducted that trip as part of his foreign policy”.

Bilawal Bhutto added that no one knew that there would have been a Russia-Ukraine conflict.

“I believe it is very unfair to punish Pakistan for such an innocent action. Of course, Pakistan is absolutely clear as far as it comes to the principles of the UN [United Nations] of non-use of force and we stand by these principles,” he said.

“We will continue to emphasize the importance of peace, dialogue, and diplomacy to resolve this conflict as soon as possible,” he added.

“We will certainly not take the side of any aggressor within this context,” FM Bilawal said, adding that Pakistan has its problems and has witnessed a decade of conflicts in Afghanistan.

“Pakistan is now tired of this war as it has sacrificed its children, leadership, men, and women,” Bilawal Bhutto said, adding, “Therefore, we think that through using tools of dialogue and diplomacy we can solve many problems”.

The country’s youngest Foreign Minister Bilawal Bhutto has earned praise for exhibiting statesmanship for refusing to criticize his political rival ex-PM Imran Khan for his trip to Moscow.

I think even Imran Khan's spokesperson couldn't defend his Russia trip as effectively as Bilawal has done here pic.twitter.com/sG1Kl9FkbO

This is what has been missing, this is Brilliant, That’s how States are run and thats how you are a Statesman, Take a 🙇‍♂️ @BBhuttoZardari

From day one, this man has shown more maturity and sensibility as compared to a lot of other well experienced political leaders and lawmakers of this country.#BilawalBhuttoZardari#bilawalBhutto https://t.co/N6FN665lC5

But no one fully predicted how controversial this official visit’s timing would eventually prove to be.

Ex-PM Imran Khan and his delegation were just settling in their hotel rooms in Moscow, when Russia’s President Vladimir Putin formally announced the invasion of Ukraine just before daybreak on February 24.

tweet
Share on FacebookShare on TwitterShare on PinterestShare on Reddit
Saman SiddiquiMay 20, 2022
the authorSaman Siddiqui
Saman Siddiqui, A freelance journalist with a Master’s Degree in Mass Communication and MS in Peace and Conflict Studies. Associated with the media industry since 2006. Experience in various capacities including Program Host, Researcher, News Producer, Documentary Making, Voice Over, Content Writing Copy Editing, and Blogging, and currently associated with OyeYeah since 2018, working as an Editor.
All posts bySaman Siddiqui