The Islamabad police shared the traffic plan from its Twitter handle 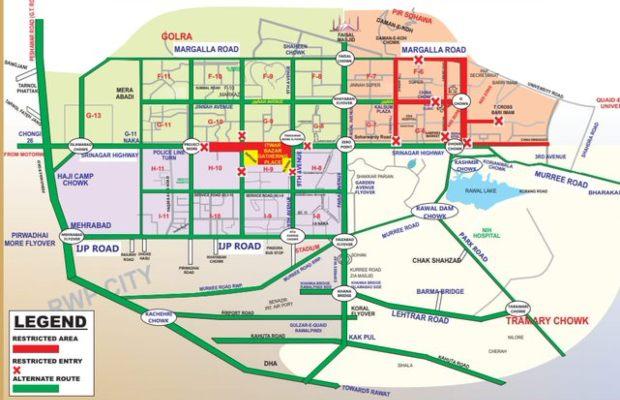 Islamabad police have issued a traffic plan ahead of PTI March 27 rally in the federal capital.

The federal capital has been the center of recent political hustle and bustle.

PTI has been given permission to hold its power show in Islamabad’s Parade Ground, whereas, JUI-F was permitted to organise its public gathering at the H-9 plot on strict conditions.

After the local administration issued NOCs to ruling Pakistan Tehreek-e-Insaf (PTI) and the opposition party, Jamiat Ulema-e-Islam Fazl (JUI-F) for holding power shows on different venues in the federal capital on March 25 and 27,  the Islamabad police has issued a traffic plan for citizen’s convenience.

A detailed traffic plan has been shared via a tweet by Islamabad Police stating:

General traffic was barred to enter the red zone while traffic would not be allowed to enter from Kashmir Chowk [roundabout] to Rawal Dam Chowk.

tweet
Share on FacebookShare on TwitterShare on PinterestShare on Reddit
Saman SiddiquiMarch 26, 2022
the authorSaman Siddiqui
Saman Siddiqui, A freelance journalist with a Master’s Degree in Mass Communication and MS in Peace and Conflict Studies. Associated with the media industry since 2006. Experience in various capacities including Program Host, Researcher, News Producer, Documentary Making, Voice Over, Content Writing Copy Editing, and Blogging, and currently associated with OyeYeah since 2018, working as an Editor.
All posts bySaman Siddiqui