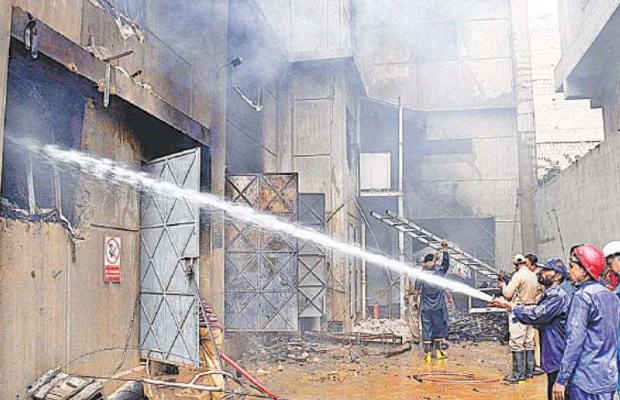 The police have registered a case against the owners and several officials of the Mehran Town chemical factory that was engulfed in fire on Friday leaving 16 workers dead.

Karachi Administrator Murtaza Wahabtook to twitter sharing a copy of the FIR.

“FIR has been registered regarding the unfortunate fire incident of yesterday at Mehran Town. A proper investigation has been initiated in this case & justice will be ensured. Insha’Allah,” he tweeted.

FIR has been registered under Sections 322 (punishment for murder) and 34 (acts done by several persons in furtherance of common intention) of the Pakistan Penal Code.

As per the FIR, the building did not have an emergency exit or an emergency alarm in case an untoward incident were to take place. “The building is constructed in such a way that no one can exit if there is an emergency situation,” it added.

FIR has been registered regarding the unfortunate fire incident of yesterday at Mehran Town. Proper investigation has been initiated in this case & justice will be ensured. Insha’Allah pic.twitter.com/e7EwE0rRnF

A case has been filed against the building and factory owner Ali Mehta, manager Imran Zaidi, supervisors Zafar and Rehan, and guard Syed Zareen.

According to the residents of the area, the fire erupted around 10 am on Friday at the chemical factory near Korangi Mehran Town Sector B-6.