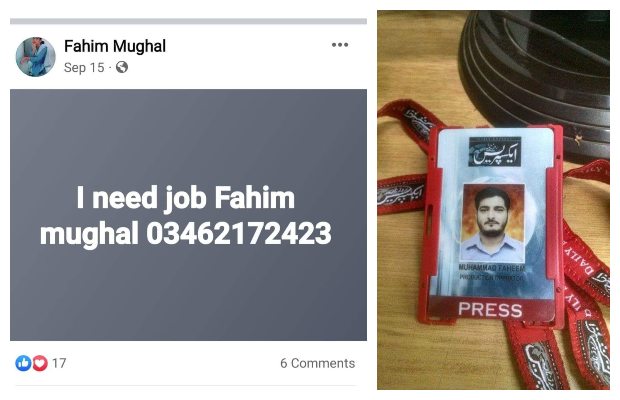 Faheem Mughal, 35, father of five children hanged himself with the ceiling fan with his wife’s dupatta on Thursday night after the family went to sleep.

As being reported he was laid off a couple of months earlier was unemployed and an Rs60,000 bank debt became too much for him to bear.

He had started driving rikshaw brought on rent, but it wasn’t helpful enough to make both ends meet.

Reportedly, the day he took his life, Faheem had no money in his pocket to buy milk for his child.

“Despite all my efforts, I have not been able to meet the needs of my children or take care of their petty desires. Related to the media sector, maybe there will be a case where I can at least make them a small house, but now I can not get a job and the rickshaw can not earn enough to get out of the debt burden. I take my CV with me everywhere, I give interviews, but the only answer I get is that the situation is in front of you now,” there were the words, Faheem Mughal, a had spoken to his wife, Shehzadi Mughal, before committing suicide.

Faheem’s wife revealed that he had attempted to take his own life twice before. Both times, she had saved him.

Speaking to BBC Urdu, Faheem’s close friend Umair Dabeer revealed that a few hours before he took his life, Faheem Mughal did not have enough money in his pocket to buy milk for his child.

The news has left the journalist community and netizens miserable.

Reactions pour in on the news of Faheem Mughal’s suicide