In a series of tweets, the PSP accused TLP of attacking its workers and election office 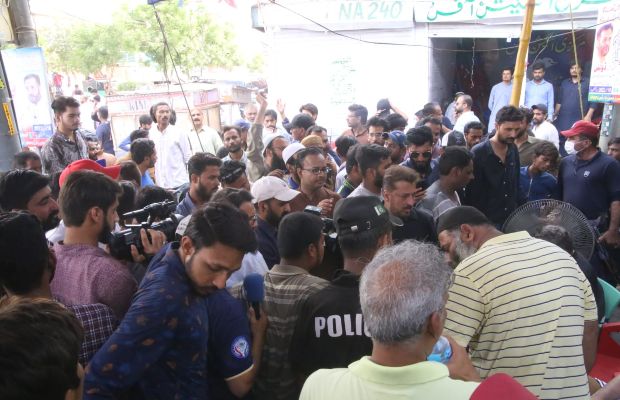 One dead, dozen workers of various political parties were injured during clashes during NA-240 by polls in Karachi‘s Landhi area.

A person identified as 60-year-old Saifullah, in a firing incident in NA-240 constituency, while several others sustained injuries as violence broke out.

As reported, the incident of firing occurred during Pak Sarzameen Party’s (PSP) Mustafa Kamal media talk in Landhi no 6.

The reports of violence are being shared on social media as well.

Terrifying scenes from NA 240 by-election in #Karachi. Its a battleground out there. pic.twitter.com/ldGbI44hKT

PSP chief Mustafa Kamal confirmed that the deceased person was a member of his party and several others were in critical condition.

“He was our party member, who was an elderly person and resided in Baldia.

The TLP people attacked us and killed my party member,” the PSP chairman said, rebutting the claims of the TLP that they were attacked.

Kamal added that had the PSP used weapons, no one would be able to open fire at their offices and return safely.

“They (TLP) are spewing lies. I appeal to the authorities that arrest them or give us weapons,” he said.

As per the hospital source, five injured people were brought, adding that some had gunshot wounds.

While others had sustained injuries after being beaten up with sticks.

Incidents of violence were reported in the Korangi and Landhi areas that fall under the NA-240 constituency.

Meanwhile, PTI and JI have boycotted the by-elections.