Begum Shamim Akhtar passed away in London on November 22 aged 89. 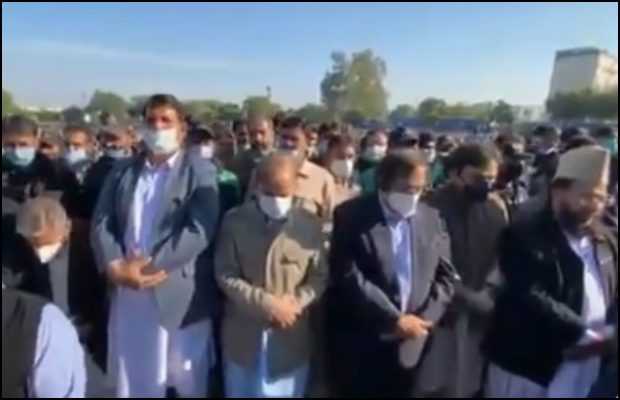 The last remains of Begum Shamin Akhtar were flown into Lahore on Saturday morning from London via British Airways flight BA-059.

PML-N President Shehbaz Sharif and his son Hamza Shehbaz were released from jail on parole for five days, to attend the funeral.

Her funeral prayers were offered at the Sharif Medical City, Raiwind where a large number of PML-N leaders and workers were present.

She was buried next to her late husband Mian Sharif and daughter-in-law Kulsoom Nawaz.

Begum Shamim Akhtar passed away in London on November 22, aged 89.

As being reported, amid the coronavirus SOPs, only 30 people were allowed inside the mosque for the funeral prayer.

tweet
Share on FacebookShare on TwitterShare on PinterestShare on Reddit
Saman SiddiquiNovember 28, 2020
the authorSaman Siddiqui
Saman Siddiqui, A freelance journalist with a Master’s Degree in Mass Communication and MS in Peace and Conflict Studies. Associated with the media industry since 2006. Experience in various capacities including Program Host, Researcher, News Producer, Documentary Making, Voice Over, Content Writing Copy Editing, and Blogging, and currently associated with OyeYeah since 2018, working as an Editor.
All posts bySaman Siddiqui