Police man arrested for misbehaving with elderly woman, after video of the incident was shared on social media

ASI Asif was suspended by IG Punjab Nawaz for his actions. 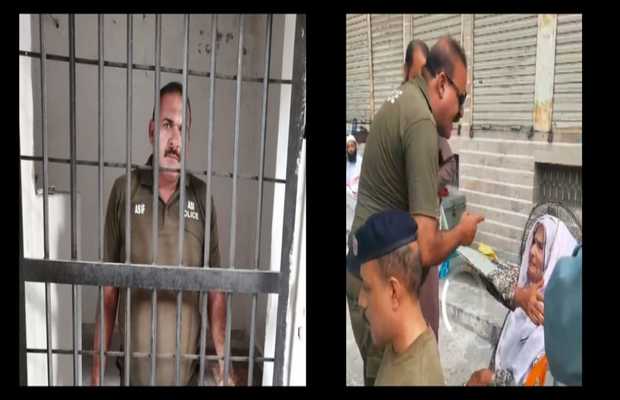 Lahore policeman, who misbehaved with an elderly woman in a video, was suspended from duty on Wednesday.

A video shared by a user on social media brought into notice that Assistant Sub-Inspector (ASI) Asif misbehaved and argued with an old woman sitting on a chair.

The shared video clip shows him shouting at the women and telling her asking ‘to keep her mouth shut’. He also threw away the stick that the woman was holding.

As being reported this incident took place outside Inspector General Punjab Arif Nawaz, where this woman had come to register her complaint.

This old lady shown in the video claims that her house is illegally possessed by the Riwind police station SHO and she wanted to register her complaint at the IG office.

The news of the police officer’s arrest was shared by Punjab government spokesman Dr. Shahbaz Gill on social media.

This is not the first time, many incidents of Punjab Police brutality are being reported through social media, this latest viral video has sparked anger among the masses, demanding serious action to be taken.

As being reported, in the past week, three people; two in Lahore and one in Rahim Yar Khan,  have died due to alleged torture by police officials.

tweet
Share on FacebookShare on TwitterShare on PinterestShare on Reddit
Saman SiddiquiSeptember 5, 2019
the authorSaman Siddiqui
Saman Siddiqui, A freelance journalist with a Master’s Degree in Mass Communication and MS in Peace and Conflict Studies. Associated with the media industry since 2006. Experience in various capacities including Program Host, Researcher, News Producer, Documentary Making, Voice Over, Content Writing Copy Editing, and Blogging, and currently associated with OyeYeah since 2018, working as an Editor.
All posts bySaman Siddiqui