Reportedly, a fine of 60,000 riyals, 5 years imprisonment, and a life ban to enter the KSA can be imposed on those who violate the sanctity of the Prophet's Mosque and chant slogans. 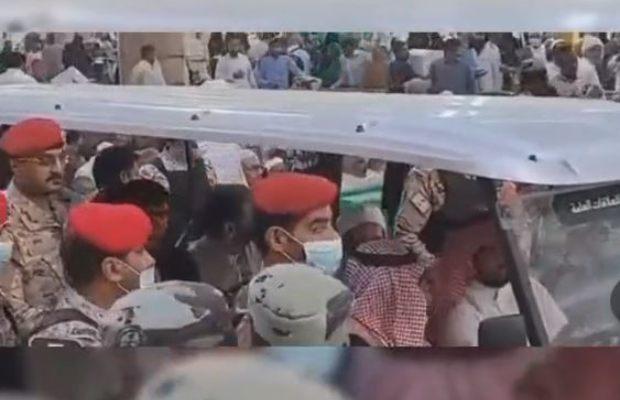 Saudi Embassy on Friday confirmed the arrest of Pakistanis over the Masjid e Nabvi incident.

In a statement issued on Friday, the Saudi  Embassy has confirmed the news of the arrest of Pakistanis is true, who raised slogans at Masjid-e-Nabvi PBUH.

A group of protesters violated the sanctity of the Masjid-e-Nabawi in Madinah on Thursday the second most holy place for the Muslims on earth.

Unconfirmed news floating on various platforms claimed that the Saudi authorities have arrested around 160 men for violating the decorum of the Masjid e Nabvi PBUH.

Reportedly, a fine of 60,000 riyals, 5 years imprisonment, and a life ban to enter the KSA can be imposed on those who violate the sanctity of the Prophet’s Mosque and chant slogans.

Earlier in the day, Federal Interior Minister Rana Sanullah said that Pakistan would humbly request Saudi Arabia to take action against those who raised slogans at Masjid-e-Nabvi and misbehaved with ministers.

The minister made the remarks in a press conference today accompanied by Adviser on Kashmir Affairs and Gilgit Baltistan Qamar Zaman Kaira.

The federal minister said that “what happened in Medina last night was saddening and badly damaged our image.”

tweet
Share on FacebookShare on TwitterShare on PinterestShare on Reddit
Saman SiddiquiApril 29, 2022
the authorSaman Siddiqui
Saman Siddiqui, A freelance journalist with a Master’s Degree in Mass Communication and MS in Peace and Conflict Studies. Associated with the media industry since 2006. Experience in various capacities including Program Host, Researcher, News Producer, Documentary Making, Voice Over, Content Writing Copy Editing, and Blogging, and currently associated with OyeYeah since 2018, working as an Editor.
All posts bySaman Siddiqui