Does it still count as an experiment if it has failed numerous times? 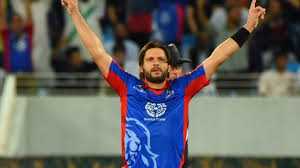 Why? Why to such highly paid, skilled & experienced people repeat the same mistake? They have all the stats in the world at their disposal. They have assistants to conduct research, which provides basis for future work. But experiments keep happening because it happened once, so many years ago. In history books, we read that many a brilliant scientist wasted their lives on trying to turn different metals to Gold. Obviously they failed. In the modern age, in cricketing terms, trying to make an opener out of Shahid Khan Afridi is a similar exercise.

The man who comes out to be all confident and defiant in public, is fairly meek when it comes to batting. So, slogging across the line with no acknowledgement of match situation & risk is not bravery. Perhaps it borders on a lack of confidence on his technique. Its a shot in hope, rather than in conviction. While batting at 7 gives Afridi that liberty, as an opener some restraint is required even in T20 cricket. Shahid Afridi at this age, doesn’t have the hand eye coordination to be a success as an opener. He hasn’t had it for a decade almost. Still team management often go in search of nostalgia of the late 90s and early 2000s.

Afridi’s wicket didn’t lose them the game. Its a risk, which they were willing to take. But they dropped Khurram Manzoor, who has had a half decent tournament. They stuck with him when he wasn’t scoring. But having scored a 50, he wouldn’t have been expecting this treatment. It was changed the balance of the squad. Karachi Kings, can implode pretty quickly. As Islamabad United & Quetta Gladiators may seem to finding form, Karachi Kings are on a downward slide, which wont be easy to arrest.