So far this season, 15 Premier League games have been called off due to Covid-19 issues. 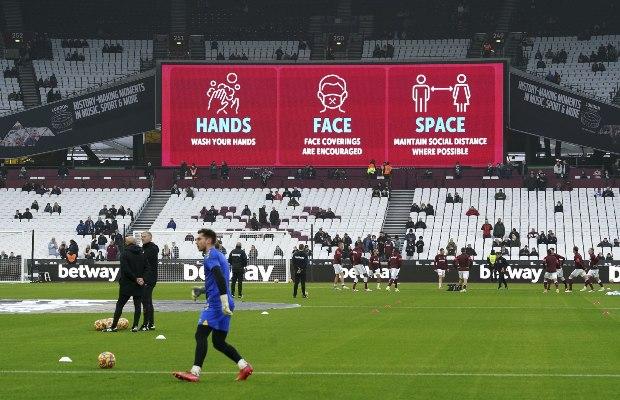 The new wave of surging cases of coronavirus has started to take a toll on the sports field and this time its English Premier League!

The Premier League has revealed a record of 103 players and staff tested positive for the coronavirus in the period from December 20 to 26.

So far this season, 15 Premier League games have been called off due to Covid-19 issues.

“The League can today confirm that between Monday 20 December and Sunday 26 December, 15,186 COVID-19 tests were administered on players and club staff,” the Premier League said in a statement on Monday.
“Of these, there were 103 new positive cases.”
The 103 cases are an increase on the previous week, from Dec 13 to 19, when 90 players and staff tested positive for the novel coronavirus.
“The safety of everyone is a priority and the Premier League is taking all precautionary steps in response to the impact of the Omicron variant of COVID-19,” the statement added.
“The League has reverted to its Emergency Measures, and has increased testing of players and club staff to daily lateral flow and twice-weekly PCR tests, having previously carried out lateral-flow testing twice a week.”
“The League is continuing to work with clubs to keep people safe by helping mitigate the risks of COVID-19 within their squads,” the statement added.

On Sunday, six Premier League games did go ahead in front of full crowds despite Britain combating a significant rise in positive Covid cases.

The match between Arsenal and Wolverhampton on December 28 was called off due to a mix of Covid-19 issues and injuries in the Wolves squad.

As being reported, no restrictions have yet been put in place for the size of crowds at matches in England, although supporters do have to provide proof of vaccination or a negative test taken in the previous 48 hours.

A record of 122,186 cases was reported on Friday in England, the highest daily number since the start of the pandemic, according to government data.