The hit that turned Pakistan cricket around. 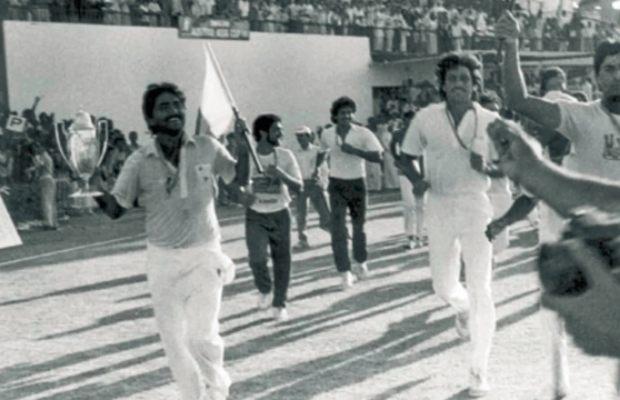 On this day in 1986, Javed Miandad hit a six off the last ball bowled by Chetan Sharma to hand Pakistan a thrilling one-wicket win over India in the final of the Austral-Asia Cup at the Sharjah Cricket Stadium.

#OnThisDay in 1986, Javed Miandad hit a six off the last ball bowled by Chetan Sharma to hand Pakistan a thrilling one-wicket win over India in the final of the Austral-Asia Cup at the Sharjah Cricket Stadium.

On April 18,  1986, Javed Miandad had changed the dynamics of Indo-Pak ODI cricket, except at ODI World Cups, with a six off the last ball in the Australasia Cup final.

After Javed Miandad, Manzoor Elahi and Salim Malik also did similar rescue acts in 1986-87, but they remained unsung.


36 years ago, Javed Miandad played one of the greatest one-day knocks in history, and cricket fans took to social media to recall the famous six of the legendary Javed Miandad.

Javed Miandad 🏏 #OnthisDay 18-04-1986(Last ball 6) of Chetan Sharma change Pakistan Cricket & start dominance against India for many years especially in Sharjah. PAK won their 1st ever Final in Cricket. He Scored 116* vs India to Register a 1 wicket win. pic.twitter.com/72bYKF87GN

On this Day, Great Javed Miandad Hit a Six at Sharjah against India to create History.
pic.twitter.com/PFNltZoIpV

Legend Javed Miandad!!!- On this day in 1986, the famous Sharjah sixer was hit by the great Javed Miandad. The hit that turned Pakistan cricket around. pic.twitter.com/Ou0Iv7ScDB

Javed Miandad interviewed the day after The Six.

Typical JM – "Eleven runs in the last over is not the most difficult of targets .. I was confident of making the runs with five twos and the winning hit"

#Onthisday Javed Miandad stunned India with a last ball six. While Chetan Sharma took all the blame for bowling a full toss, few also blamed poor captainacy decisions by kapil Dev. Here is the times of India coloumn on this issue pic.twitter.com/gbLSleICvh