All is well, assure India and Australia after on field 'banter' 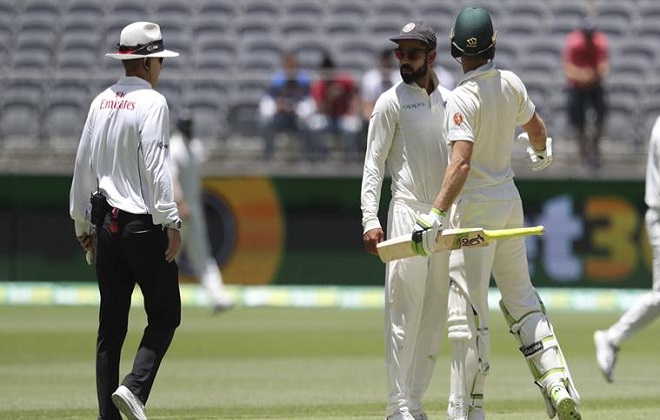 It’s a far cry from the ugly days of Monkeygate but the Australia vs. India ‘banter’ has finally kicked off after 7 days of no stand offs. Virat Kohli didn’t follow the ‘Aussie style mental disintegration’ rather taking one from the Kumar Sangakara rule book reminding him of consequences of failure.

Much like Sanga, Kohli told Paine he was staring at a 2-0 deficit if he messed up with the bat However, unlike Pollock, Tim Paine was quick to snap back reminding Kohli that he still needs to bat again before any of that happens. This was day 3. On the 4th day, umpires intervened there was almost physical contact between Kohli and Paine.

This continued even after Kohli had left the crease after being dismissed by Nathan Lyon. Paine, keeping wickets to Lyon, and perhaps knowing that the mike will pick it up, said ““I know he’s your captain, but you can’t seriously like him as a bloke?”

In a matter of minutes, Paine was a social media hit. Kohli’s famous in your face approach has been questioned a lot. Not least by legendary Indian actor Naseeruddin Shah. He posted on his official facebook page.

“Virat K is not only the worlds best batsman but also the worlds worst behaved player. His cricketing brilliance pales beside his arrogance and bad manners.. And I have no intention of leaving the country by the way.”

In the backdrop Cape Town and subsequently ‘New Australia’, the media asked probing questions of the Mohammad Shami and Josh Hazlewood as to who instigated this melodrama and is this a sign of more to come during the rest of the series. Both players made light of the comments and were reluctant to place blame. With Australia strong favourites to make it 1-1 tomorrow, things might just get a little spiced up come the boxing day test.