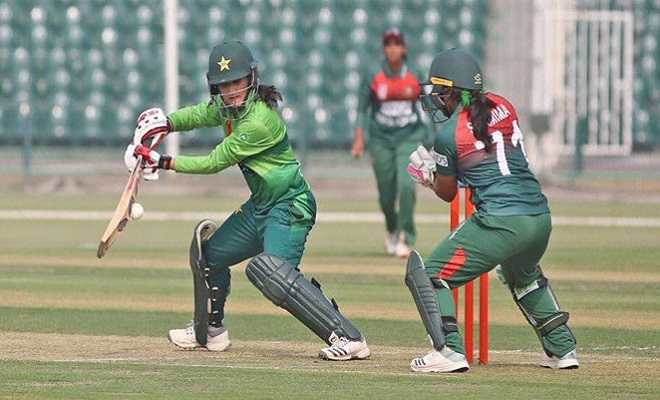 Pakistan Women’s team opened their WWT20 campaign in an emphatic manner with a clinical eight-wicket win over highly fancied West Indies Women’s team. This All-round team performance has given them an excellent chance of going through their group.

In Canberra, West Indies won the toss and opted to bat 1st. Diana Baig’s excellent spell kept the batting side in check. In 10 overs, West Indies posted only 44 for the loss of two wickets. However, Shemaine Campbelle and Stafanie Taylor cut loose with an aggressive partnership, both scoring 43 each. At the end of the 20 overs, West Indies Women’s team finished at 124/7. Nida Dar, Diana Baig, and Aiman Anwer bagged a brace each.

In response, Pakistan were off to a blistering start. By end of the power play, the openers had taken them to 48. Javeria Khan was particularly severe, hammering 35 of 28 balls. Muneeba Ali wasn’t far behind with almost a run a ball 25. Captain Bismah Maroof was off to a shaky start but soon found her rhythm. Alongside Nida Dar, she took the team home with 10 balls to spare.

Javeria Khan was given the player of the match for her aggressive knock. While Pakistan were clinical with bat and ball, they would have to certainly improve their fielding in the upcoming matches.

Nonetheless, this win was crucial for Pakistan’s chances of progressing to the semi-finals. England Women’s team are the clear favourites to qualify from the group. The 2nd spot will be contested between South Africa, West Indies and Pakistan. In a recent series, South Africa had beaten Pakistan narrowly by 3-2 at home.

Pakistan’s next match is against the mighty England side on Friday, 28th February.