Dania has already given permission to Aamir Liaquat to marry for the fourth time. 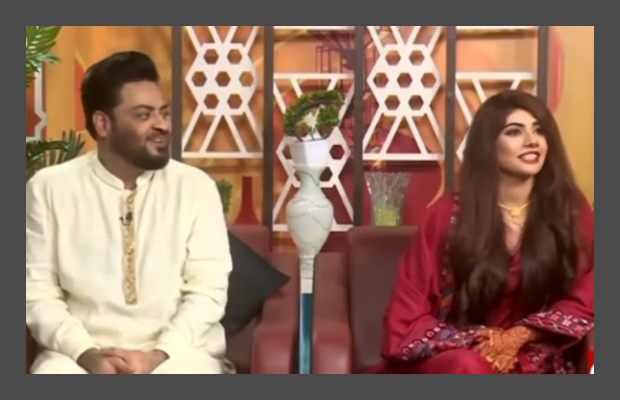 Aamir Liaquat makes his first TV appearance with his third wife and has spilled beans on marrying an 18-year-old!

It’s been almost a week since social media is buzzing with the news of PTI MNA Aamir Liaquat’s announcement of his third marriage.

What left people shocked was that a famous TV personality aged 49 has married a teenager.

Syeda Dania Shah is Aamir Liaquat’s new wife aged 18 and was later introduced as a TikToker as well.

However, it was a day ago when Aamir Liaquat was invited as a guest on a news show along with his wife.

During the conversation on the show, Aamir Liaquat spilled the beans regarding his third marriage.

A clip from the same interview is now doing rounds on social media, revealing that Dania has already given permission to Aamir Liaquat to marry for the fourth time.

“When we met for the first time, it was only for 28 minutes. It wasn’t a 28-day affair. Nothing of that sort ever happened,” Hussain shared.

“I visited Lodhran for an event. It was a Milad function organised by an affluent family. I also called Jahangir Tareen Sahab from Lodhran. He later invited me to his farmhouse,” he said.

“After Milad, we went to Lodhran’s Pir’s house. I didn’t know him. I discussed some personal affairs with him. He told me he will settle me with someone now but the only condition was that I wouldn’t get to see her before. When I met her, it was Dania,” Hussain contined adding, “But when I did meet her, I came to know that when she was a kid and would cry, her parents would put on Aalim Online to calm her.”