Fakhr-e-Alam went on attempting 28 days “Mission PArwaaz”, to circumnavigate around the globe 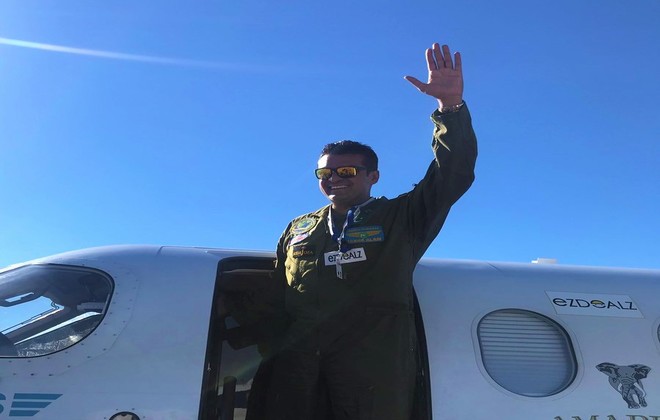 Singer and activist Fakhr-e-Alam is just one touchdown away from becoming the first Pakistani to circumnavigate the globe as part of “Mission Parwaaz”. By the time you read this news piece, proud Pakistani would have created the history.

The 28 -days tour kicked off on 10th of October from Clearwater, Florida. During his course of circumnavigation, he has flown to Boston and then to the Canadian Airbase in Goose bay Canada and then to Greenland. From Greenland, Alam flew to Iceland, United Kingdom, Egypt and then to Bahrain and then Dubai.

From Dubai, Fakhr touched down at Karachi. From Karachi he flew to Islamabad and then Lahore. From Lahore, he flew to Dhaka, Bangkok, Singapore, Jakarta and then Darwin in Australia. Other places he few are Philippines, Taiwan, South Japan, North Japan, the Pacific Bay, Russia and Alaska.

It was in Russia where arriving upon Fakhar was detained for few hours. As his visa expired few hours before arriving at the Yuzhno-Sakhalinsk airport.

The mission is going to be concluded in Florida. We are keenly waiting for the latest updates to arrive.

tweet
Share on FacebookShare on TwitterShare on PinterestShare on Reddit
Saman SiddiquiNovember 3, 2018
the authorSaman Siddiqui
Saman Siddiqui, A freelance journalist with a Master’s Degree in Mass Communication and MS in Peace and Conflict Studies. Associated with the media industry since 2006. Experience in various capacities including Program Host, Researcher, News Producer, Documentary Making, Voice Over, Content Writing Copy Editing, and Blogging, and currently associated with OyeYeah since 2018, working as an Editor.
All posts bySaman Siddiqui