Pakistan’s entertainment industry is filled with everyday banter and most of the time it’s downright childish or rude comments being fired from all ends. This time however a dig at Pakistani drama industry was averted by Imran Ashraf like a pro.

YouTuber Shahveer Jaffery who is in and out of social media news quite frequently, took it to Instagram to pass some remarks on Pakistani dramas and their ‘oh so monotonous’ storyline.

“Pakistani’s dramas are good but they all revolve around SAAS BAHU. I think I’m going to have to think of a creative a new unconventional web-series in Pakistan and change the entire TV DRAMA industry,” said Shahveer in a now deleted Instagram post.

Now while Shahveer maybe a popular YouTuber, we all kind of remember the times he has been questioned on his content’s originality. Anyhow, Shahveer’s post ended up reaching Ranjha Ranjha Kardi actor Imran Abbas and he left the most subtle (and strongest) response for Shahveer to ponder upon. 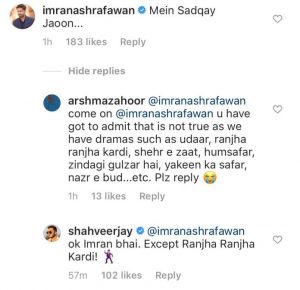 It didn’t take Shahveer much time to realize the problem with his earlier remarks. This is how he tried to salvage the situation.

But Imran now intended to fully explain Shahveer on how to appropriately comment on the dramas and the industry- one of the most sought after too. 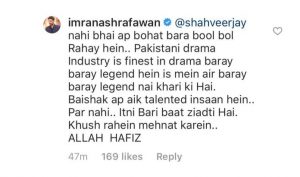 “I mean it’s alright, you’re a talented man but one should not boost so much. This industry is a big one created by legends and what you said is an insult to those legends,” Imran aptly penned down as he nicely schooled the YouTuber.

After Imran’s comment, Shahveer didn’t further drag the matter and deleted his first post so we would like to assume he has ‘aborted his mission of revolutionizing the Pakistani drama industry’ – isn’t it so Shahveer?