TikTok star Jannat Mirza has left her fan saddened after she revealed that she is going to move from Pakistan and planning to reside in Japan, it emerged on Thursday.

The social media influencer on her Instagram handle started a QnA session for her fans who have any query related to her and her plans after the Chinese  video-sharing social networking service has banned in the country.

Mirza, who has recently reached the milestone to become first TikToker to cross 10  million followers on the video sharing app,  also shared a picture on her Instagram account  where she is  followed by more than a million people.

A user asked while commenting on her photo, if she is moving to Japan of which Jannat Mirza responded by writing “jee” in reply. 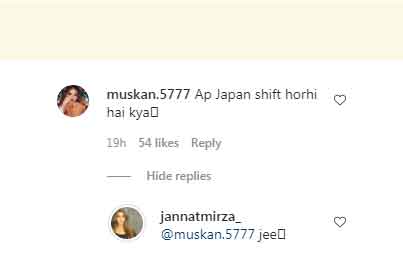 The screenshot of her response has also doing rounds on social media which was captured by  her fans.