This seems to be a meme-worthy attempt, which Kevin Hart nailed it to perfection! 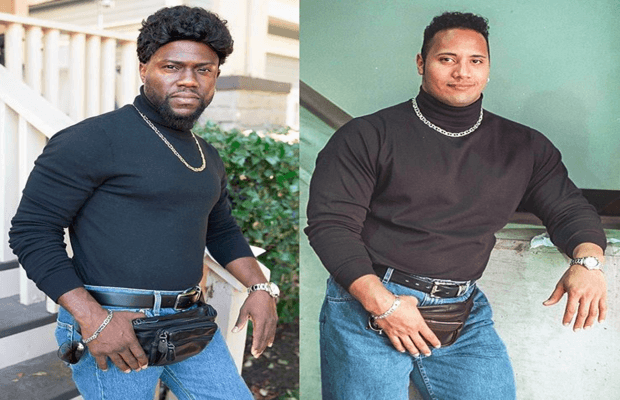 As it is Halloween, Kevin Hart took to Instagram to share an extremely funny video, showing off his Halloween costume that is inspired by Dwayne Johnson’s iconic ’90s black turtleneck look.

This seems to be a meme-worthy attempt, which Kevin Hart nailed it to perfection!

Furthermore, the video ends with a teaser of a new trailer for the highly-anticipated film Jumanji – The Next Level, the sequel to Jumanji.

The video shows Hart, who arrives at The Rock’s house to get the trick-or-treat candy, right after four kids arrive in Jumanji characters’ costumes. Though

Johnson was happy to share candies with the kids, and at the same time seems to be less amused to see Kevin at his doorstep.

While sharing the hilarious video, Kevin captioned his post saying, “I killed it with my Halloween costume this year…. @therock had the nerve to get an attitude with me. We are dropping a brand new trailer for Jumanji The Next Level tomorrow. Stay tuned!!!!!!”

Kevin Hart will feature in the latest installment of Jumanji, which picks up where the 2017 film left off.