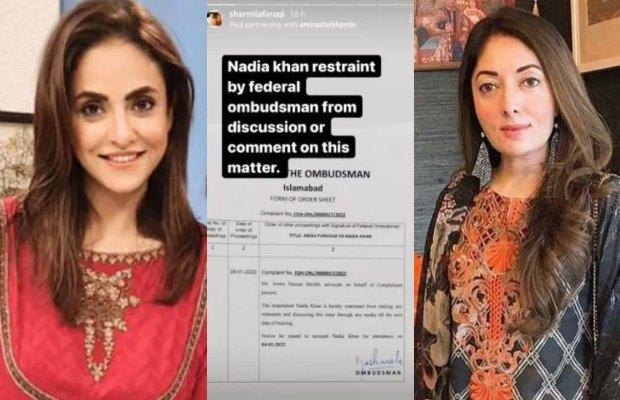 Nadia Khan has been restraint from discussion and comment on the feud with Sharmila Faruqui!

The directives come from the office of the federal ombudsman.

Sharmila shared the copy of the legal notice in her Instagram story that stated that Nadia Khan is not allowed to comment and discuss the matter.

“Nadia Khan restraint by federal ombudsman from discussion and comment on this matter,” she captioned her Story. The notice dated Jan 26 was sent to Khan through Faruqi’s lawyer stated that the former had published a defamatory video on the YouTube channel Outstyle.com.

“It is a well-known fact that anyone who runs a YouTube Channel gets remuneration for views and engagement as the website is designed to encourage and incentivise the sharing of sensational information without any fact-checking mechanism or regulation. Hence, by posting hate speech against my client, you are thereby trying to create a controversy just to get noticed,” the notice stated.

On Jan 20, Nadia Khan had posted another video to the YouTube channel OutStyle.com, in which she lashed out at Faruqi and implied that that the PPP leader wanted “media promotion”. She also said that her comments about Faruqi’s mother were meant to appreciate her and not mock her.