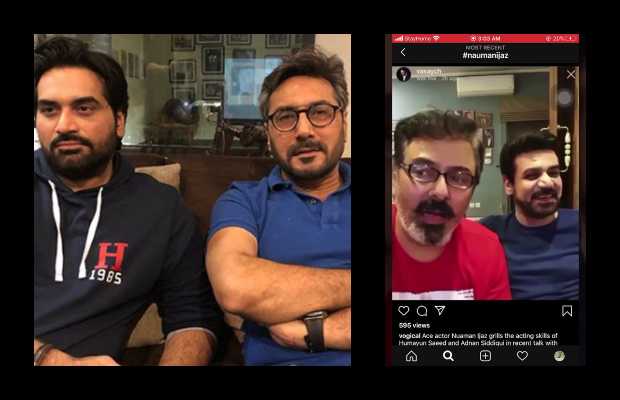 Amidst the global pandemic, celebrities going live on Instagram is the new trend. Quite recently, Nauman Ijaz recently went live on Vasay Chaudhry’s Instagram handle. Whilst he spoke about several different topics, the highlight was Rehaai actor’s expressing his straight forward and candid views on Humayun Saeed and Adnan Siddiqui.

Speaking about Humayun Saeed’s blockbuster drama ‘Merey Pas Tum Ho’ which the actor didn’t watch yet, he stated how actors tend to groom themselves after years of being in the industry yet Humayun hasn’t yet.

“But maybe if he keeps working hard like this, maybe someday he’ll accidentally know acting. I’m optimistic, one should never lose hope. I pray that he gets it soon,” he further added.

Well, this wasn’t very polite and rather harsh and direct. Moving on to Adnan Siddiqui, the actor went on to say how “Adnan is right there with Humayun, if he has been successful so far then it’s never too late [for him to learn].”

He, however, assured the viewers that he said it without having any harsh feelings for either of the two.

The two actors responded back to him on Fahad Mustafa’s live game show. The Mere Pas Tum Ho star told everyone how Nauman Ijaz played the character of his father in an old drama and will be playing it again in an upcoming project.