The multi-day festivities, dubbed as "wedding of the year" continue on Sunday with a Hindu ceremony for Nick Jonas and Priyanka Chopra 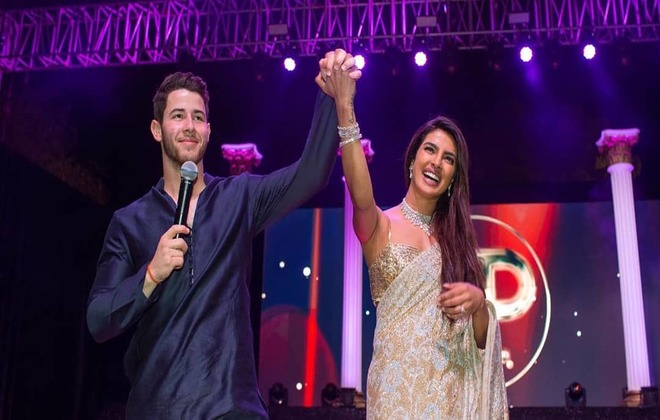 Bollywood actress Priyanka Chopra and American singer Nick Jonas have tied the knot at a lavish ceremony in a royal Indian palace before friends and family on 1st of December.

The multi-day festivities, dubbed as “wedding of the year” continue on Sunday with a Hindu ceremony for the US singer Nick Jonas and “Quantico” actor Priyanka Chopra. Fans all around the world eagerly wait to see the images of bride and groom.

The sky was lit up with fireworks as the celebrity couple exchanged vows on Saturday in a Christian ceremony at the lavish wedding ceremony of Umaid Bhawan palace in Jodhpur, India.

The Quantico star has recently shared the extravagant images and video of her Sangeet reception held at the court. Which looks a full fledge concert party. Families of both the bride and groom can be seen in the full festive mood.

The 36-year-old actress captioned her post, “It all began as a fierce song & dance competition between the families but needed, as always, as a huge celebration of love. Nick and I were looking forward to the Sangeet (muscial evening), another pre-wedding ritual. and to see what each side had put together.”

“And what a performance it was. Each family telling our stories through song and dance, filled with lots of laughter and love. We were both filled with gratitude for the effort, the love and the laughter and will carry the memories of this special evening for the rest of our lives. It is an amazing start to a lifetime of togetherness for our families and friends. #gratitude,” her caption read further.
https://www.instagram.com/p/Bq4sB7WHWR0/

It’s being reported that for Christian wedding PeeCee’s dress along with the groom was designed by the designer Ralph Lauren, as well as for the family.

Congratulations to @PriyankaChopra and @NickJonas on the occasion of their wedding. Ralph Lauren is honored to have dressed the couple as well as the members of their wedding party.

The latest we get to know that the bride has been penalized by the Indian Supreme Court for the fireworks at her wedding. As fire crackers have been banned in India as it causes air pollution.
https://twitter.com/TiimesHow/status/1068913016354234368

tweet
Share on FacebookShare on TwitterShare on PinterestShare on Reddit
Saman SiddiquiDecember 2, 2018
the authorSaman Siddiqui
Saman Siddiqui, A freelance journalist with a Master’s Degree in Mass Communication and MS in Peace and Conflict Studies. Associated with the media industry since 2006. Experience in various capacities including Program Host, Researcher, News Producer, Documentary Making, Voice Over, Content Writing Copy Editing, and Blogging, and currently associated with OyeYeah since 2018, working as an Editor.
All posts bySaman Siddiqui