Wife of legendary actor Raj Kapoor, Krishna Raj Kapoor passes away at the age of 87.

She was regarded as the silent force behind the legendary star! 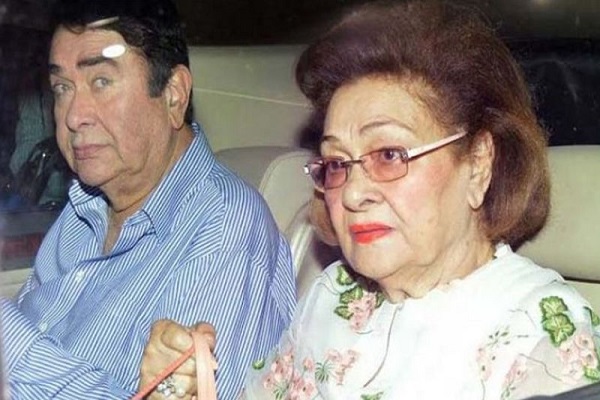 Krishna Raj Kapoor, the wife of legendary Bollywood actor Raj Kapoor, passed away on Monday after suffering a cardiac arrest at the age of 87. As being reported her last rites will be performed at Chembur crematorium.

The news of her death was shared by her eldest son and veteran actor Randhir Kapoor. In a statement he said, “My mother passed away at about 5am today due to cardiac arrest…old age was another factor. We are deeply saddened by her demise”.

Born Krishna Malhotra, she married Raj Kapoor in 1946. She is survived by five children, 3 sons Randhir, Rishi and Rajeev and 2 daughters Ritu and Riima.

Raj Kapoor's wife #KrishnaRajKapoor passes away at 87. Raj Kapoor married Krishna Malhotra in 1946 and they had five children together – Randhir, Rishi and Rajiv Kapoor and daughters Rima Jain and Ritu Nana. Ranbir Kapoor, Kareena Kapoor and Karisma Kapoor were her grandchildren. pic.twitter.com/FHowCCQe7r

Several took to social media to express grief and extend condolences on her death.

Krishna aunty .. my mother and me will miss u always.. #KrishnaRajKapoor

Krishnaji no more, Sad. a lady who became a devi. They don’t make them like her anymore. #KrishnaRajKapoor

She had such an uncommon elegance and warmth. My mom wrote Prem Rog for RK. She told me many stories of Krishna Ji’s affection, hospitality & impeccable style. The original woman in white! #KrishnaRajKapoor https://t.co/oqY2d8ykc9

Saddened at the passing away of #KrishnaRajKapoor ji. A lady of exemplary grace & dignity, she will ever be remembered for her kindness. Deepest condolences to the Kapoor family. May God give you enormous strength to tide over this unbearable loss. @chintskap pic.twitter.com/5ljjZpUMxP

Deepest condolences to the Kapoor and Nanda family on the passing of #KrishnaRajKapoor .. Truly one of the most elegant, beautiful ladies ever.. All my love and prayers. May her soul RIP🙏🏼 @chintskap

Thank you Krishna Aunty for always being so kind and loving and for your blessings that you so lovingly gave every single time that I met you. Your grace and dignity lives on. I feel so much love for you. Rest In Peace #KrishnaRajKapoor

.🕉🙏🏻🕉 Condolences to the entire Kapoor family. An era passes away,#KrishnaRajKapoor .God give you strength,and may the soul rest in peace. Om Shanti. @chintskap

I am so sorry to hear of the passing of #KrishnaRajKapoor The few times I interacted with her were so memorable; she was an incredible personality full of life and passion and with never a hair out place! She will be missed greatly. My deepest condolences to the family.

Mrs. Krishna Raj Kapoor is no more. She was an extremely graceful lady and a fantastic host. Will miss the occasional interactions that she used to have with us. RIP. #krishnarajkapoor #KrishnaRajKapoor pic.twitter.com/33SjDK1fcf

Deepest condolences to the entire Kapoor Family … had the privilege of meeting Krishna ji on a couple of occasions. She was a picture of grace, dignity & elegance. RIP #KrishnaRajKapoor ji –

Many celebrities are visiting Kapoor’s residence for the condolences on Krishna Raj Kapoor’s death.

#RaniMukerji arrives at the late #KrishnaRajKapoor’s residence to pay her condolences to the family. pic.twitter.com/Df17tTOD5y

#KarismaKapoor arrives at the Kapoor residence to pay last respects to her late grandmother #KrishnaRajKapoor. pic.twitter.com/hUpFJO7hp1

tweet
Share on FacebookShare on TwitterShare on PinterestShare on Reddit
Saman SiddiquiOctober 1, 2018
the authorSaman Siddiqui
Saman Siddiqui, A freelance journalist with a Master’s Degree in Mass Communication and MS in Peace and Conflict Studies. Associated with the media industry since 2006. Experience in various capacities including Program Host, Researcher, News Producer, Documentary Making, Voice Over, Content Writing Copy Editing, and Blogging, and currently associated with OyeYeah since 2018, working as an Editor.
All posts bySaman Siddiqui