Mustajab tries to convince Dua to forget about the divorce however, she is adamant on her decision. 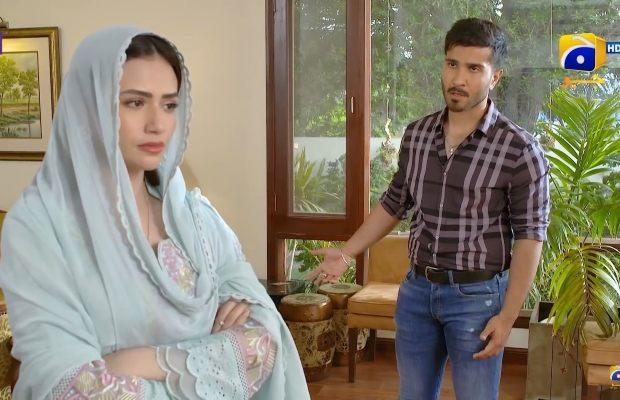 7th Sky Entertainment’s latest blockbuster Aye Mushte Khaak has got the audience glued to their screens ever since the first episode went on air! The show is a battle of beliefs and faith, where Dua, played by Sana Javed, who is a firm believer in God ends up getting married to Mustajab, played by Feroze Khan and she finds out later that he does not believe in God. The performances by the cast have remained exceptional throughout the series and the audience waits eagerly every week for a new episode.

In this week’s episodes, Dua rushes to the hospital with Mustajab as she is worried about Dayyan and her tension only grows when she learns that there has been no progress since she last came. Mustajab and Taqi are now starting to get worried about Dua and her father and try to convince them to go home.

Shakeela tries to comfort Nimra that Dayaan will be just fine and God will make everything better. Dua also tries to comfort her mother while also finding comfort in her own words. She believes that God will listen to them and Dayaan will be fine. Dua also meets with the imaam sahib and tells him about how Mustajab questions everything. Imam sahib talks to her and tells her to not listen to what others have to say, as long as her faith is strong God will always be there for her.

At the hospital, the doctors still have no good news to give regarding Dayaan. The doctors have given them one more day and they are not hopeful. Mustajab goes home and informs Dua’s family to mentally prepare themselves for anything at this point.

Mustajab shows up at the imam sahib’s place in hopes of finding Dua. The imam tells Mustajab that Dua came to talk about what’s bothering her and Mustajab questions whether he is a heart specialist ir something of that sort to be dealing with these things. Dua and Taqi show up too and Dua apologizes to the imam sahib for Mustajab’s behavior. Mustajab does not look too happy about the fact that she showed up with Dayaan’s friend Taqi.

On their way home, Dua refuses to call Mustajab’s home as her own and she openly voices her disagreement on the fact that he does not believe in God. She tells him that if he doesn’t change his ways and his beliefs then she has the right to separate and get a divorce which makes Mustajab mad as he says he will never give her a divorce. Dua finds it impossible to live with someone who does not have the same beliefs as her and she asks Mustajab for a divorce.

At the hospital, Dayaan finally makes progress and the doctors are hopeful again.

Mustajab tries to convince Dua to forget about the divorce however, she is adamant on her decision.

Mustajab tells his mother that Dua wants a divorce and she is shocked to hear this. Shakeela is embarrassed by Mustajab’s behavior and is afraid to face her friend now. Mustajab can’t live without Dua, he thinks he can’t be happy without her. He ask his mother to help him.

Shakeela asks for forgiveness for her son from Dua however Dua stops her and says she no longer knows any Bobby in her life.

Shakeela resorts to her last hope and talks to Nimra to convince her daughter to take her decision back.

Mustajab asks Dua for some time so that he can try and live life the way that she wants. He wants to try and change. Dua wants no material things all she wants is someone who is humble and believes in God the way she does and she is convinced that person can never be Mustajab.

Mustajab is convinced that Dua will not win and that he would not give her a divorce under any circumstances.

What will happen next? Will Dua win? Will Mustajab actually change his ways to convince Dua or will he make this a matter of winning and losing? To find out keep watching Aye Mushte Khaak on Mondays and Tuesdays at 8 pm only on Geo Entertainment.