Shiza spares no chance to demean Nimra and her mother 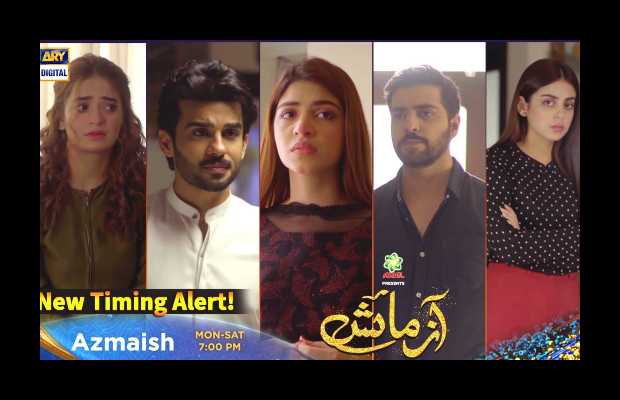 ARY Digital’s drama serial Azmaish has been shifted from its Prime Time to 7 pm serial slot and it airs daily except for Sundays, so here is an overview of the week’s episodes. Many developments have occurred in these episodes Rohaan and Samreen’s wedding takes place, Nimra’s father finds out about his ex-wife’s house and he starts blackmailing her. Shiza is spitting her venom everywhere and she is trying to give Basit, Nimra, and her mother a tough time.

Rohaan despite having ego issues finally agrees upon marrying Samreen and eventually their wedding takes place. Samreen is very happy with her wedded life but her insecurities are not leaving her in peace. She gets jealous whenever Rohaan casually compliments Nimra. Rohaan gives gifts to everyone including Nimra, Shiza cannot digest that and she ruins the dress Rohaan has gifted her.

Moreover, Shiza is not stopping here, she is trying to add bitterness to Samreen’s happy life as well. She is badly influencing her sister by telling her not to take her Phupho on outings as she is not her phupho now but only her mother in law. Samreen is not using her own brain, she is blindly following what Shiza feeds her. Samreen starts misbehaving with Rohaan and Phupho which has turned off Rohaan from her.

Shiza and Basit’s relationship is never smooth, Shiza treats Basit like trash and spares no moment to insult him. Basit’s patience has reached its equilibrium when she insults him in front of her ex fiance by calling him her servant. Basit takes a stand and leaves the house. He comes back only for Nimra’s mother. Basit has all support of Tufail, he blindly trusts him and he has also started snubbing Shiza for badly treating her husband. Shiza makes up her mind to confront Basit on the work front too. She tells his father that she will be joining the office. Tufail is more than happy to know this but Shiza must be cooking something in her head.

Nimra’s father has found out their house and now he has started blackmailing Nimra’s mother well one wonders why she is being so scared to see him? She should shoo him away by instructing the guards without even meeting him let alone she gives him her gold bangles without even informing Tufail. Shiza has seen her giving bangles to a stranger and she tells that to her father. Moreover she also tries to demean Basit and Nimra by posing that they are having an affair. Tufail do not believe to any of her daughter’s story but neither he strongly reacts on it by shunning her. Nimra shares with Basit that he wants to meet her father but in reality, his father is not what she is imagining, he is a greedy person who only wants money. Nimra’s mother begs Tufail to save her daughter from his ex-husband. Tufail is wondering how come he will save Nimra from meeting her biological father when she herself wants to meet him.

tweet
Share on FacebookShare on TwitterShare on PinterestShare on Reddit
Rameeza NasimAugust 12, 2021
the authorRameeza Nasim
Rameeza Nasim, a Paralian, passionate about poetry, drama and fiction. By giving drama critiques I feel like I am endorsing the writer's message to the audiences, I love my job. Being a critic responsibility lies on my shoulders to point out the flaws and shortcomings of the play be it on writer's , performers or director's end . I did my Masters in English Literature and Linguistics .
All posts byRameeza Nasim