Neelum and Affan's wedding is fixed 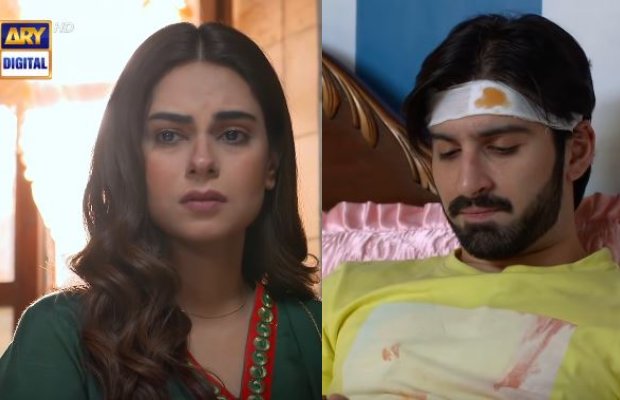 Baddua the drama serial airing at ARY Digital is fast-paced and that is the best part of the play, though stories have a few loopholes too. In the previous episode, we have seen that Abeer insults Junaid’s girlfriend on a phone call, and then Junaid gets mad at her when he comes to know about that insult as a result he gets into a car accident. In this episode, Junaid continues to be rude to Abeer.

Abeer is lucky that Allah has saved her from Junaid’s wrath by having a minor car accident with Junaid otherwise he would have shaken Abeer. Junaid is not well but still, all he thinks about is his girlfriend and he is not ready to talk with Abeer in fact he shouts at her whenever he sees her and he is not ready to forgive her.

Neelum’s parents have set her wedding with Affan. Affan and his family are busy with their wedding preparations. Neelum is still worried, she is fearing that luck might not be still at her side what if Affans ends up like Junaid. Well, we are wondering that what is going to happen when Neelum will come to know that Junaid is Affan’s best friend. One wonders how come a flirt brat is such a close friend of someone so decent and sober like Affan.

Mohsin’s mother’s grieving and cursing Abeer hoping for her disaster is becoming too dragged and tedious. Abeer’s father’s mourning is also too repetitive. Umair has made up his mind that he is going to teach Abeer a lesson that she will not forget. He is resolute to take revenge for the flirting she has done with him. Umair has seen Abeer’s house and he has her number too, he is planning something big to trap Abeer.

Abeer is taking good care of Junaid but he is not talking with her properly. He is taking out all his frustration on Abeer, as his girlfriend is not picking up his phone. Well, on the other hand, Affan calls Junaid and tells him about his wedding preparation, we are fearing that Affan might tell Junaid about Neelum, we really want Affan to wed Neelum, we do not want to ruin their relationship. It seems that Mohsin’s mother will go with Affan to Junaid’s house to drop the card. There Mohsin’s mother will see Abeer and once again her wounds will get fresh. Abeer is definitely going to suffer.

tweet
Share on FacebookShare on TwitterShare on PinterestShare on Reddit
Rameeza NasimDecember 7, 2021
the authorRameeza Nasim
Rameeza Nasim, a Paralian, passionate about poetry, drama and fiction. By giving drama critiques I feel like I am endorsing the writer's message to the audiences, I love my job. Being a critic responsibility lies on my shoulders to point out the flaws and shortcomings of the play be it on writer's , performers or director's end . I did my Masters in English Literature and Linguistics .
All posts byRameeza Nasim