The story is unnnecessarily dragged 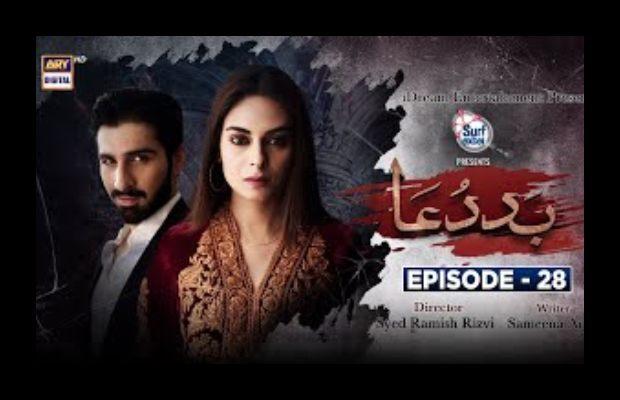 ARY Digital’s drama serial Baddua is 28 episodes down. And at points, we find it a bit dragged as the story should have been concluded by now. The play has turned quite tedious with such prolonged stubbornness of Abeer. In the previous episode, we have seen that despite Abeer spoiling the function Kamaran still wants to marry Falak. And in the latest, we find that Kamran’s mother agrees to the wedding as well.

The episode begins when Kamran is convincing his mother not to call off the wedding. She is resolute that no matter what happens she is not going to keep any relations with that family. Kamran, on the other hand, is persistent, he says that if his mother will not support him he will take matters into his own hands and will marry Falak no matter what happens.

Kamran goes to Falak’s place to tell her parents that he is not calling off the wedding but to his surprise, Falak’s parents say that they cannot accept this offer without his mother’s presence. It speaks volumes about Falak’s parents’ respectfulness and dignity. Abeer is so vile that she is still after ruining her own sister’s happiness, she is telling Falak to insult Kamran for the refusal his mother did last night. She even misbehaves with Kamran’s mother.

Kamran’s mother to our surprise agrees for having the wedding on a fixed day. I think she must have overheard Falak’s parents telling Kamran that they cannot accept his offer without his mother’s presence and there she has realized how respectable they are. She has also realized that Abeer is very different from Falak just like his own two sons are poles apart. Kamran’s brother is making lots of hues and cries over not calling off the wedding, one wonders why he is so against his brother marrying Falak? Well, the wedding should have been shown in this episode, the story is too dragged.

Junaid is all set to marry Sahar, he is such a nincompoop that he even agrees to the most greedy condition the girl’s brother puts that of naming all his own company shares against her. It is clearly such an idiotic thing to do. Junaid’s character is not making any sense at all. He is a flirt he can enjoy his bachelorhood once again then why he is so desperate to marry his ex-girlfriend whom he has once refused to marry because he has no intentions of marrying her. Well, Sahar is marrying Junaid to take her revenge for the refusal he made way back in his university days.

tweet
Share on FacebookShare on TwitterShare on PinterestShare on Reddit
Rameeza NasimMarch 29, 2022
the authorRameeza Nasim
Rameeza Nasim, a Paralian, passionate about poetry, drama and fiction. By giving drama critiques I feel like I am endorsing the writer's message to the audiences, I love my job. Being a critic responsibility lies on my shoulders to point out the flaws and shortcomings of the play be it on writer's , performers or director's end . I did my Masters in English Literature and Linguistics .
All posts byRameeza Nasim