Junaid is marrying Abeer in revenge. 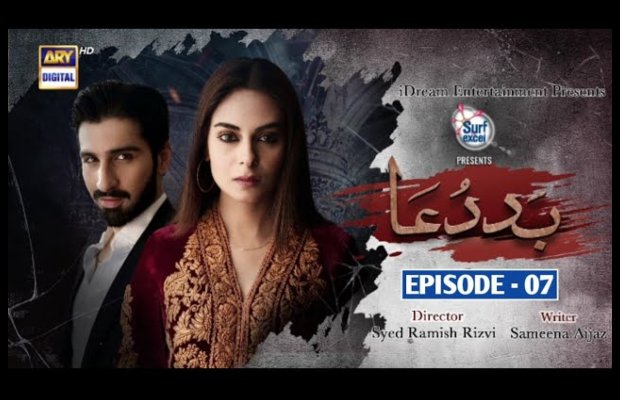 Baddua the drama serial airing at ARY Digital is problematic at many levels but the performances are on point. In the previous episode, we have seen Abeer dare to refuse in front of rishtay walas on her proposal. In this episode, Junaid and Abeer eventually get nikkafied in a very hasty manner as Abeer’s father wants to get rid of her as soon as possible.

Abeer’s parents particularly her father have decided to marry her off as soon as possible. The decided day is the next day, it seems so odd that Junaid’s family has no reservations about Abeer’s father’s condition. They have so conveniently accepted having the nikkah the very next day! Junaid does not like Abeer but he is marrying her for revenge as he blames her for his breaking up with Neelum and all the humiliation he faced but he does not realize that he himself is the actual culprit, not Abeer.

Then we have seen unnecessary dragging scenes of Mohsin’s mother and Rohina’s still in grief mode. I have an issue with the whole narrative of the play “Baddua” Abeer is certainly a bad character she is leading Mohsin, flirting with many boys but she is never responsible for his death. She is being blamed for the wrong reasons. Mohsin’s suicide is his own act.

Rohina’s brother Affan happens to be the best friend of Junaid, well one wonders how come such a nice and decent fellow can be a close friend of a flirt guy. Junaid is thoroughly a problematic brat how can such a person be compatible with Affan? Junaid goes to meet Affan and his family has jumped to the conclusion that he has run away from the scene. It seems that Junaid is habitual of creating such embarrassing situations for his family.

Abeer tries to apologize to her father but he is in no mood to forgive her all he wants is to get rid of her. We have seen that he is in great stress and throughout the whole Nikkah session he is lost in the thoughts of Mohsin’s mother’s ill wishes, her words are still echoing in his head. Well in the whole scene Affan, Junaid, and his brother are congratulating each other and celebrating the moment but no one is paying any heed to the poor father who has been so aloof in the whole situation he has not been mentally present nor he has prayed for his daughter all he is fearing for her daughter’s curse.

tweet
Share on FacebookShare on TwitterShare on PinterestShare on Reddit
Rameeza NasimNovember 2, 2021
the authorRameeza Nasim
Rameeza Nasim, a Paralian, passionate about poetry, drama and fiction. By giving drama critiques I feel like I am endorsing the writer's message to the audiences, I love my job. Being a critic responsibility lies on my shoulders to point out the flaws and shortcomings of the play be it on writer's , performers or director's end . I did my Masters in English Literature and Linguistics .
All posts byRameeza Nasim