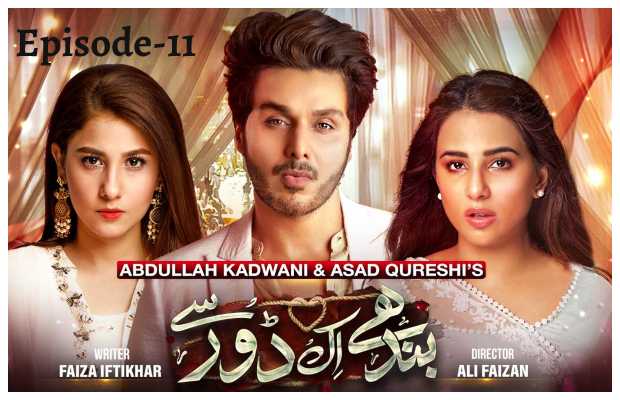 Bandhay Ek Dour Se, the drama serial airing at Geo Entertainment has turned from a light heart play to an annoying one where poor Maheen (Ushna Shah) who has a pure heart is suffering for nothing, while Roshini (Hina Altaf) who is being so mean that she deliberately ruining Maheen and Omar’s married life by attracting Omar (Ahsan Khan) with all her charms and tricks, the play in real is torturing the audiences as we simply do not want to see Maheen suffering for anything.

Roshini is so vile that she comes at Maheen’s Valima and she is shamelessly trying to attract Omar with all her charms and tricks, not for a single second she has realized that he is now married to her best friend in fact she is trying to brainwash him against poor Maheen. She tells him that Maheen is going to react like a typical wife now and she can’t bear her getting close with him now but Omar says that Maheen will understand as she already knows about their relationship.

Well, when Maheen like a normal wife inquires him about Roshini’s presence at the function he simply says that she came from her side. Maheen when tries to tell him the actual reality of Roshini, Omar gets furious and instead of listening to Maheen, he starts blaming her for defaming Roshini, and moreover he starts avoiding her. He even does not attend Maheen’s mother’s dinner.

Roshini is such a mean girl that she even traps innocent Maheen into her false story knitting, she tells her that she was joking with her about Nabeel, she just wanted to bug Omar. She is not interested in Nabeel at all. She starts shedding crocodile tears in front of her and also makes a hue and cry for trying to make her bad in front of Omar’s eyes. She shamelessly tells her that if she will try to defame her in front of Omar she will make her own loss as Omar is not going to hear anything against her.

Dadi and Omar’s mother exchange of taunts are so refreshing to watch, the way she is scolding Omar for not joining them at Maheen’s mother’s house is so cute. Poor Maheen has no choice but to apologize. She very humbly apologizes to Omar for saying negative things about Roshini by telling that she is mistaken. On the other hand, Roshini is busy in fooling Omar and Maheen both by her fake excuses and tantrums. She has already won Omar from Maheen.