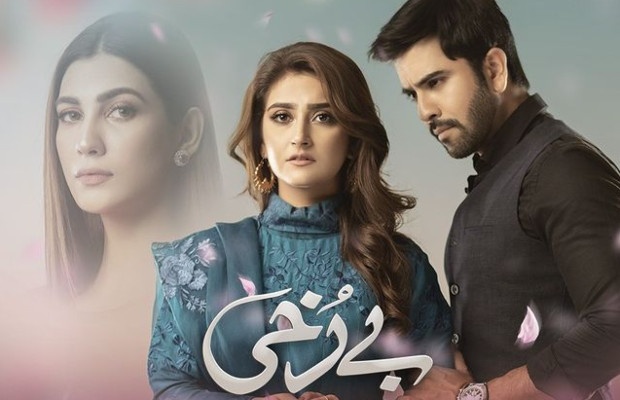 Newly started Ary Digital drama serial Berukhi seems to be the beginning of an interesting tale based on class disparity. There is an introduction of three households in the play. The story is written by Ghazala Naqvi and it is directed by Mohsin Mirza. The lead cast of the serial consist of talented Hiba Bukhari, Junaid Khan and Nazish Jahangir. Sabeen is a character, a simple girl from a humbling background, on which the whole story of the play moves around.

The opening scene of the play shows an emergency case at the hospital. A girl has committed suicide and her poor and helpless father is seeking help with a character Maaz (Hassan Ahmed) who used to be the boss of the deceased girl. He settles all the case and poses as if he used to respect her a lot when in real he is taking advantage of that poor girl and he has ditched her by making fake promises of marrying her.

Then there is an introduction of a character Maira (Nazish Jahanghir) who seems a very arrogant and proud girl. She makes a lot of hue and cry over inviting her poor Taya’s family. Then there we see an intro of a humble household family of that poor Taya (Noor ul Hassan) who has a daughter Sabeen (Hiba Bukhari) and a son. It is shown that Maira’s father financially supports Sabeen’s family by giving them some monthly amount.

Then we are introduced to the supposedly the hero of the drama Irtiza (Junaid Khan) whose family dynamics seems intriguing too. His father gets a heart attack and he is in critical state. His house is the famous Mir House which we see almost in every other ARY Play and 7th Sky Productions. We are tired of watching this Mir house over and over, makers please change the setting. Well back to the story the story seems interesting but as a start its quite a weak start of the play.

Later in the episode, we see that the same lecherous guy Maaz introduced in the opening scene is Maira’s Mammu, he is a compulsive womanizer and he is divorced twice. He lives with his sister in Maira’s house. He sees Sabeen at Maira’s birthday and he has set his eyes on her. Maaz’s mother with by trick fixes Sabeen and Maaz’s engagement in a way that no one can refuse straight away but no one is ready to accept this proposal by heart as everyone knows Maaz’s reality. Well, the most shocking thing is that why Sabeen’s chacha has let her wife fix this proposal when he himself knows the reality of his brother in law?

tweet
Share on FacebookShare on TwitterShare on PinterestShare on Reddit
Rameeza NasimSeptember 17, 2021
the authorRameeza Nasim
Rameeza Nasim, a Paralian, passionate about poetry, drama and fiction. By giving drama critiques I feel like I am endorsing the writer's message to the audiences, I love my job. Being a critic responsibility lies on my shoulders to point out the flaws and shortcomings of the play be it on writer's , performers or director's end . I did my Masters in English Literature and Linguistics .
All posts byRameeza Nasim