Aiza is feeling helpless to save herself and Faiza kids 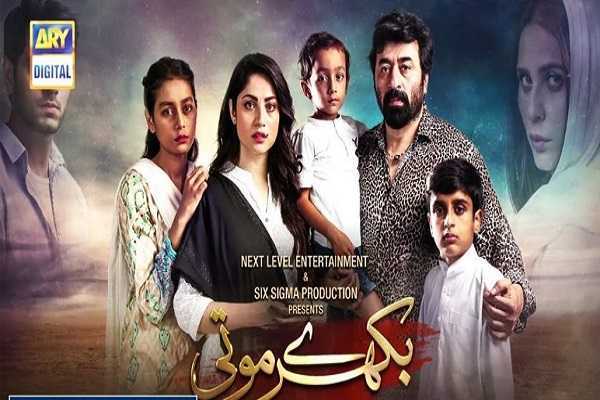 ARY Digital’s Bikhray Moti is a drama serial which is addressing some really important issues in a very effective way, the main theme of the play is children’s right and along with that, there are various other issues being raised in this play including domestic violence, child abuse, child labor, and child marriage. Neelum Muneer, Yasir Nawaz, Hummayyun Naz, Samina Ahmed, Waseem Abbas all have given their best performances.

The episode begins when Janu’s Taya (Hummayun Naz) sends money to Zulfi’s account and then when he calls him to thank him, he tells him that he is sending Janu back to Karachi as he is not happy there and also Aiza (Neelum Muneer) has called his wife and insults her for not sending Janu back. Zulfi (Yasir Nawaz) who only wants money gets worried. He has a very loud argument with Aiza where he is telling her not to intervene in his matters. He is about to throw her out of the house when kids come in between pleading their father not to say anything to Aiza. What a heartbreaking scene it was, even Aiza gives up and she agrees that she will not again ask him to bring Janu back.

Janu’s scenes are so heart wrenching, his cruel Tayee is not even giving him food, she is so vile that she cannot see that how hungry is that poor child who works hard at their shop. Janu is left with no choice but to run away to Karachi on his own and for that, he is getting into the trap set by that child abuser who tells him to come at a specific time on a particular street from where he will take him to Karachi.

Janu makes an excuse to his Taya that his Tayee is calling him home. He reaches that specific lane at the given time but instead of being taken away he is been forcefully abducted. The same child abuser is now with Janu’s Taya helping him to find out Janu. Janu’s Taya is in real trouble, he is extremely worried and Janu’s vile Tayee has created a huge drama by calling Janu “Haye mera bacha” she is shedding crocodile tears in front of her neighbors pretending herself as to be very caring.

Aiza is feeling helpless to save herself and Faiza’s children from Zulfi’s brutality. She is herself becoming the victim of domestic violence for which she used to blame her sister for suffering silently, now she has no choice but to bear it silently too. She is sending Shezaadi to school but her Dadi (Samina Ahmed) is planning to marry her off to that aged man as she has taken money from him and that money is stolen. She cannot return the money so she has to marry Shehzaadi but Aiza clearly tells her that she will never going to let this happen. The episode ends when Aiza coincidentally meets Ahad and he requests her to have few words with him. He still wishes to marry her. Aiza agrees to meet Ahad, has she done the right thing?