Chauraha Episode-26 and 27 Review: Junaid confesses his feelings in front of Zoya 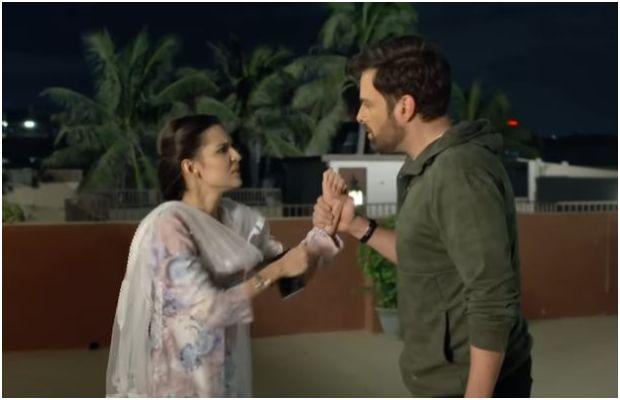 Geo Entertainment’s 7th Sky Entertainment’s production Chauraha is down with 27 episodes. The story unfortunately is not going as strong as it had started. Performances are on point, particularly Madiha Imam and Mikaal Zulfiqaar’s. In the previous episodes, we have seen that Zoya’s mother says yes to Arsal’s parents. In the latest set of episodes, it is shown that Zoya once again escapes another abduction attempt.

Well taking creative liberty is okay but taking too much of it seems a bit odd! The wild imagination shows that Junaid is imagining a very vital scene where Shireen demands a divorce from Saleem Sahab when Zoya tells everyone that Junaid is her kidnapper. Well to our surprise this whole twist of the events is just a wild imagination of Junaid which keeps him away from saying anything to Zoya.

Arsal’s mother tells him that Zoya does not look happy with this engagement. Arsal wants to talk with Zoya on this matter. Arsal offers her the ride to her house but she declines his offer. On the bus stand, Junaid’s ex-group of guys try to kidnap Zoya but Zoya manages to escape on top of that Arsal timely arrives at the spot and he saves Zoya from those goons by beating the hell out of them.

Naila’s scenes are quite misleading and confusing, at places she genuinely seems good. Particularly the scene where she talks with her father telling him how badly he needs his wife and also convincing him to be caring and nice towards her. We were wondering that is Naila is going through a change of heart. Naila is trying to be nice to Shireen and Zoya. On the other hand, she is trying to gather information about Zoya and tries to use it against her in front of Junaid little does she know that Junaid already knows everything about Zoya.

Naila eavesdrop on Shireen and Zoya’s conversation where Zoya is telling her that some guys tries to abduct her today. Naila breaks this news to Junaid who gets alarmed by hearing it. He tries to talk to Zoya but she shuts her room’s door. Junaid goes straight to his gang’s den where he finds only one guy and he beats the hell out of him. Junaid has become more cautious and protective of Zoya. Moreover, Junaid confesses in front of Zoya that he has started loving her and he later regrets why he has said it to her. Well, one thing is confusing us why Zoya is still trying to save Junaid? Why she is not naming him when she is at risk of abducting him again?

tweet
Share on FacebookShare on TwitterShare on PinterestShare on Reddit
Rameeza NasimSeptember 7, 2022
the authorRameeza Nasim
Rameeza Nasim, a Paralian, passionate about poetry, drama and fiction. By giving drama critiques I feel like I am endorsing the writer's message to the audiences, I love my job. Being a critic responsibility lies on my shoulders to point out the flaws and shortcomings of the play be it on writer's , performers or director's end . I did my Masters in English Literature and Linguistics .
All posts byRameeza Nasim