Momin heart is enamoured once again with Aashi's love 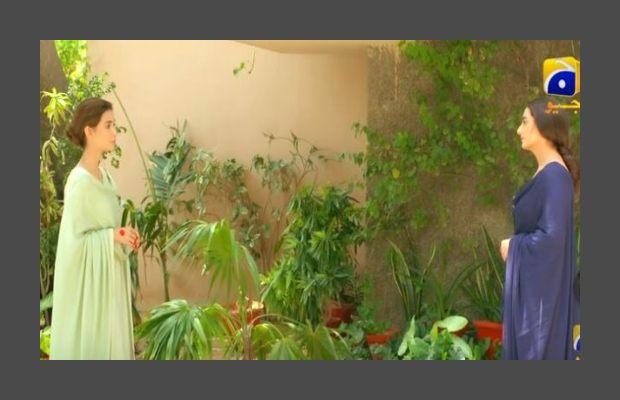 7th Sky Entertainment production Dil e Momin is 41 episodes down and it seems too much of a stretch. The story could have been concluded by now. Performances are brilliant as usual. In the previous episodes, we have seen that Momin’s heart starts melting for Maya. In this week’s episodes, it is shown that Aashi is back in Momin’s life and his heart has once again enamored with his childhood love.

Momin’s heart has inclined towards Maya he starts noticing her and somehow Maya manages to melt Momin’s heart. Momin has brought gold hoops for her from a jewellery shop. He forgets his phone at that shop so he revisits that shop and on his way back from that mall he met Fakhar’s mother who imparts him the news of Aashi’s divorce and what Fakhar has done with her.

Momin when hears what Aashi has gone through, his world has turned upside down. His heart has once again filled with Aashi’s love and there is no place left for Maya in his heart. Momin shares with Maya about Aashi and asks her to pray for him but little does he know that he is badly hurting Maya. Maya, what a transformation she has been through she has become an absolutely changed girl for whom her lover’s feelings and happiness matter more than her own’s.

Maya instead of complaining or feeling jealous congratulates Momin on finding his love in his life once again. Here Momin’s character seems a bit selfish and out of character how can he be so shameless and mean that having in nikkah with Maya, he brings Gajray for Aashi and insists her to wear that. It is Aashi who has some moral compass she refuses to accept Momin’s advances. Momin’s sister and mother are also at Maya’s side they do not want him to leave Maya.

Well, Momin too does not want to leave Maya. He has planned to keep both of them. Momin’s mother raises a very valid question will he be able to do justice to Maya? Will he be able to love her the way he loves Aashi? Maya achieves a new level of greatness she goes to Aashi’s place to convince her to accept Momin. Aashi is astonished to hear what Maya says to her, she thinks that Maya has come here to beg from her to leave Momin but here she sees a different Maya telling her not to refuse Momin. Will Aashi still going to come into Momin’s life? Will Aashi’s moral compass allow her to snatch Maya’s happiness?

tweet
Share on FacebookShare on TwitterShare on PinterestShare on Reddit
Rameeza NasimApril 5, 2022
the authorRameeza Nasim
Rameeza Nasim, a Paralian, passionate about poetry, drama and fiction. By giving drama critiques I feel like I am endorsing the writer's message to the audiences, I love my job. Being a critic responsibility lies on my shoulders to point out the flaws and shortcomings of the play be it on writer's , performers or director's end . I did my Masters in English Literature and Linguistics .
All posts byRameeza Nasim