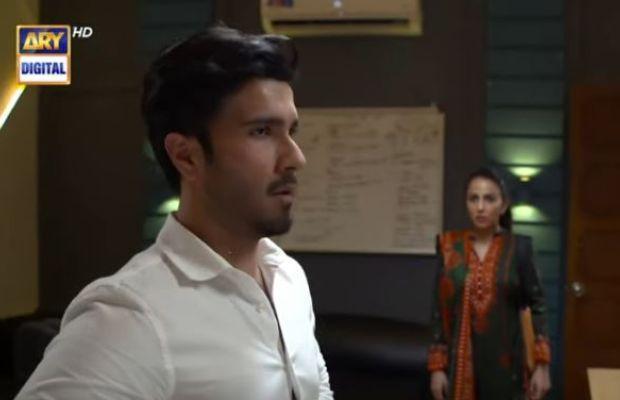 Ary Digital’s drama serial Hubs is 4 episodes down. The issue with the play is that it is quite slow-paced. And we think it requires a bang to make the narrative interesting. Although we are enjoying Feroze Khan and Ushna Shah’s performances still we need more. In the previous episode, we have seen Ayesha entering Basit’s office. In this episode, Ayesha joins Basit’s office as his PR.

The best thing about this play is Feroze Khan’s soft and mellow portrayal of Basit, it is so good to see him in a different character, unlike his typical character portrayals. Basit is mellow but he is definitely not spineless he proposes Soha but his heart and soul are not in this. He is having second thoughts but then Soha announces their engagement publicly at a party by asking him to slide down the ring through her finger in front of all. Basit has got no choice but to accept he has to fulfill his father’s will.

Although I have been quite vocal about the financial abuse being practiced at Ayesha’s house. In this episode, I started feeling empathy towards Ayesha’s mother who is struggling hard to meet her ends. We have realized in this episode how badly she needs Bano to support her when the landlord gives her the last warning demanding his rent. Well, Bano could have supported her after her marriage too if she has shown a bit of faith in her daughter.

Bano’s suicide could be avoided, normalizing suicidal attempts should not be part of our plays. Well maybe Bano’s suicidal attempt may going to add to the story or may her relationship with her mother will change. Her mother is still worried about her finances and it makes sense now she is under pressure. Bobby Phuhpo’s character is like a typical phupho she was at a party with her bhabi in shooing away Talal’s family now she is behaving as if she is the only one in the house who cares for Bano.

Ayesha is successful in landing her job and she eventually joined Basit’s office. There is nothing like a bang in their first meeting. Ayesha convinces Basit to get her hired by telling him that she badly needs this job and she is very hardworking. The good thing about Ayesha is that despite her mother’s pressure to ask for a loan in the office, she does not do any such kind of foolishness, in fact, she sells her mobile phone to get the money. Our heart goes out to her. Her mother at times behaves quite unreasonably. We are waiting for the moment when Basit starts taking interest in Ayesha. Pace up the story! plus we need a bang, please!

tweet
Share on FacebookShare on TwitterShare on PinterestShare on Reddit
Rameeza NasimJune 1, 2022
the authorRameeza Nasim
Rameeza Nasim, a Paralian, passionate about poetry, drama and fiction. By giving drama critiques I feel like I am endorsing the writer's message to the audiences, I love my job. Being a critic responsibility lies on my shoulders to point out the flaws and shortcomings of the play be it on writer's , performers or director's end . I did my Masters in English Literature and Linguistics .
All posts byRameeza Nasim