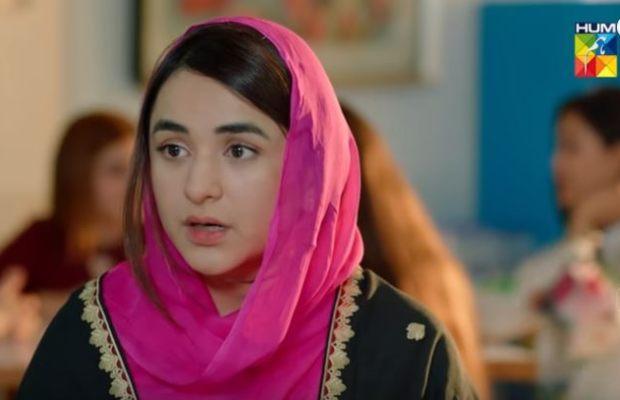 Ishq E Laa the drama serial airing at Hum TV is 17 episodes down although the play has lost its impact due to repetitions. However, the play has taken an interesting turn this week. In the previous episode, we have seen that Azka gets an anonymous patron of her who pays five years’ fees for her medical studies. In this episode, Azka starts her new life as a medical student and she prays for the happiness and well-being of her unknown benefactor.

Azka with her bhabi Kanwal goes out for her college shopping and there she finds Abid who when hears the news of her getting admitted to medical college gets happy and excited. He owns her as his wife to be and he openly tells her not to take any romantic interest anywhere in the college as she will only get married to him.

Arbab Haroon tries to hide his worker Sher Khan but Azlaan has spotted him in his house. Azlaan is after the police to catch that man. Police raids at Sher Khan’s house and there they get him. The police are interrogating Sher Khan in his own way but he is not uttering any word against Arbab Haroon which is making Azlaan even more furious.

Arbab Haroon gets to know about Sher Khan’s custody in the police he gets panicked and he uses his sources to release him and he tells Sher Khan to leave the city as soon as possible. Azlaan is now not having that intense hallucination about Shanaya that he used to have and it’s mainly because he is getting more practical now. However, Azlaan is not happy for not seeing Shanaya he wants to get her. Azlaan’s helplessness is so heart-touching. He goes to a saint asking him to tell him how he can find his Shanaya. He even has an argument with his therapist.

Azka starts her new life chapter at her Medical college and she introduced herself as a topper to her teacher. The Medical college is a state-of-the-art one and there she meets Zain another topper it seems that Zain has a thing for Azka as the way he looks at her and then he introduces himself to her. Azka is also being pranked by the seniors with a box of lizards. She is too happy when she returned back telling her mother and bhabi what a fantastic day she had. Azka is praying for the happiness and well-being of her secret benefactor. Will Azka take interest in Zain?

tweet
Share on FacebookShare on TwitterShare on PinterestShare on Reddit
Rameeza NasimFebruary 18, 2022
the authorRameeza Nasim
Rameeza Nasim, a Paralian, passionate about poetry, drama and fiction. By giving drama critiques I feel like I am endorsing the writer's message to the audiences, I love my job. Being a critic responsibility lies on my shoulders to point out the flaws and shortcomings of the play be it on writer's , performers or director's end . I did my Masters in English Literature and Linguistics .
All posts byRameeza Nasim