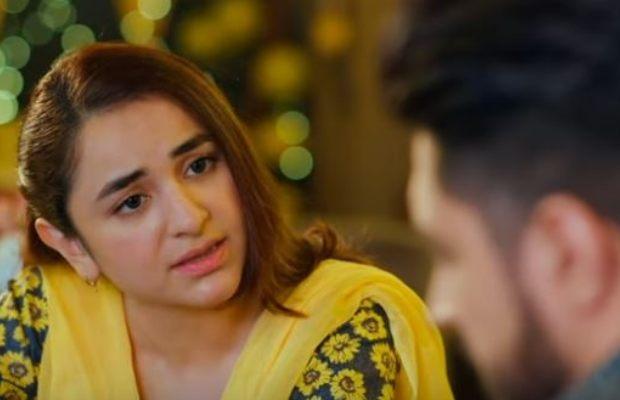 Ishq e Laa the drama serial airing on Hum TV is 23 episodes down. Azka and Zain’s breakup is shown and it is Azka who has split up with Zain. The story has failed to create any impact so far but it has nuances. Performances are on point. In the previous episode, we have seen Azlaan’s pride and arrogance have left Azka shocked.

The episode begins with Azka going to meet Zain for the last time. It looks so good that she does not lie about her meeting with Zain with her mother. Azka’s mother has full confidence in her, she says that she knows she will never going to let her down. Azka tells Zain that they cannot be together if his parents are not approving their relationship.

Zain’s character sounds a bit dubious as he is insisting on Azka for court marriage sort of thing as she mentions. Why court marriage why can’t they have a simple nikkah? Azka and her mother do not approve of any of such proposals without the consent of Zain’s parents. One wonders what Zain is up to how can he think to hide his nikkah from his parents when he has to marry his sister’s sister-in-law. How can he ruin his sister’s life?

Abid is not going slow, he is still persistent to marry Azka no matter what Azka thinks of him. He in front of all neighbors grabs Azka’s hand and threatens her that if she is not going to agree to marry him he will abduct her. Azka is really disturbed and it is the bitter fact that Azka’s father and brother’s absence has given Abid a boost to commit such a shameless act. Kanwal Bhabi through her lady boss’s brother gets Abid arrested in a drug-dealing case and Abid has also come to know that he has been reported by Kanwal. Abid is resolute to take his revenge.

Azlaan’s mother seems unwell she has gone through some severe pains. It seems that Azlaan might lose her mother as well and it may break his arrogant nature. Azlaan’s mother shares her wish with Azlaan to remarry which Azlaan takes as a joke by asking her mother is she emotionally blackmailing him?

The scene where Azka’s mother is looking for Kanwal’s suit is really a cute scene but it seems a useless and unnecessary filler kind of scene with positive messaging. The episode ends on a sad note where Zain calls last time telling Azka that he is getting engaged but he will never going to forget her. What do you think Azka is right to leave Zain?

tweet
Share on FacebookShare on TwitterShare on PinterestShare on Reddit
Rameeza NasimApril 2, 2022
the authorRameeza Nasim
Rameeza Nasim, a Paralian, passionate about poetry, drama and fiction. By giving drama critiques I feel like I am endorsing the writer's message to the audiences, I love my job. Being a critic responsibility lies on my shoulders to point out the flaws and shortcomings of the play be it on writer's , performers or director's end . I did my Masters in English Literature and Linguistics .
All posts byRameeza Nasim