Isra's brother has forgiven her 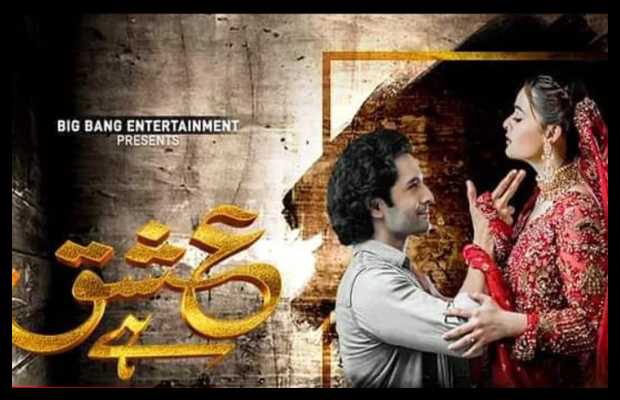 Ishq Hai the ARY Digital drama serial is four more episodes down now and the story has taken major development.  Isra and Shahzaib are now happy and enjoying their married life. In the previous episodes, we were shown that Isra’s heart has softened for Shahzaib and she has accepted him as her husband. In these episodes, we have seen a major development that Isra’s family, her mother, and brother have finally forgiven her.

Haris is behaving like a lunatic obsessive stalker who is closely following Isra and Shahzaib wherever they go and he is haunting Isra everywhere. Well, Isra needs to report about him to her husband. Despite spending a night at lockup Haris is not yet over with his madness. In fact, he becomes a partner in planning with Shahzaib’s mother and Nimra and they must have a solid deadly plan to separate Isra and Shahzaib.

Isra’s mother gets ill, she is alone at home so the servant calls Isra, she comes with Shahzaib and they take the best care of her, they take her to the hospital. Later when Hammad comes along with his wife he once again starts snubbing Isra but this time Isra breaks her silence she starts speaking for herself and she clearly tells his brother that she will keep visiting this house and no one can stop her from meeting her mother. Hammad becomes speechless and he does not utter a single word.

Later Isra begs forgiveness from her brother and Hammad has no choice but to accept his sister. Although Isra’s toxic bhabhi keeps nudging her husband for forgiving her sister like that, she is so toxic that even Hammad cannot stand her toxicity he tells him to shut up otherwise he will going to divorce her on which she further creates a scene. Isra and Shahzaib are getting close, love is in the air and no one except them is happy in the house. Nimra has arrived to live with them as her parents are going for Umra. Nimra attacks Isra in her room and then she calls Haris to speed up the plan as soon as possible. Well, we are wondering what they are up to?

tweet
Share on FacebookShare on TwitterShare on PinterestShare on Reddit
Rameeza NasimAugust 18, 2021
the authorRameeza Nasim
Rameeza Nasim, a Paralian, passionate about poetry, drama and fiction. By giving drama critiques I feel like I am endorsing the writer's message to the audiences, I love my job. Being a critic responsibility lies on my shoulders to point out the flaws and shortcomings of the play be it on writer's , performers or director's end . I did my Masters in English Literature and Linguistics .
All posts byRameeza Nasim