The show is nearing its end but it doesn’t seem like fate really is on Mahi and Farhad’s side. 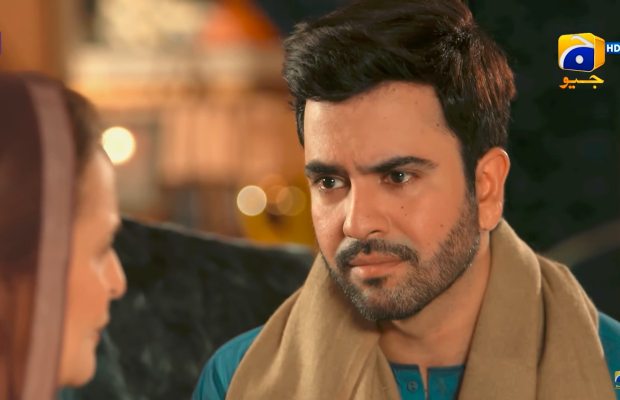 The episode begins with Sikandar’s mother telling him about Mahi and Farhad. Since he already knows about them, he wholeheartedly accepts her wish without asking any questions. The two of them go to Mahi’s parents’ place and ask them to get Mahi married to Farhad. Kazim Shah and his son are angry at their proposal. They accuse them of bringing a bad name to their family by taking Mahi’s name with a faqeer.

Sikandar leaves but before he does, he tells them that the relationship between their families is over but he will still fulfill all of the commitments he made with them regarding the election. He implores them to look at the pain in Mahi’s eyes. She won’t let them down if that’s what they are concerned about.

Nazim Shah doesn’t back down from his plan of killing Farhad. He tells Noora, his right-hand man, to deliver his message to Farhad right before he is about to be killed. This is the consequence of casting an evil eye on families like theirs.

Sikandar’s mother goes to the shrine to see Farhad. She tells him that Sikandar has refused to marry Mahi. She gives him his blessings and tells him that she wants him and Mahi to end up together. While sitting alone, Farhad thinks about the last time he saw his family before leaving for Multan. He misses his family but is helpless because he can’t go to see them.

Sikandar shows up at Romana’s place and tells her that his mother has agreed to their marriage. He is thereafter she gave him her permission. Romana is elated when she hears this and the episode ends with the two of them having a sweet and emotional reunion.

The show is nearing its end but it doesn’t seem like fate really is on Mahi and Farhad’s side. Will they end up together? Will Dilawar kill Farhad? To find out, keep watching Khuda Aur Mohabbat on Fridays at 8 pm on Geo TV and watch this space for more reviews.