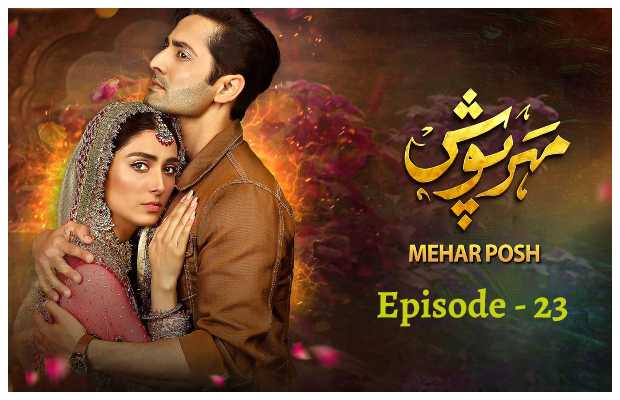 Meher Posh the drama serial running at Geo Entertainment is one play that is now becoming more and more tragic and intense, and to be honest it is a torturous watch these days. Mehru is now forcing Shah Jahan to marry Ayat and Shah Jahan is taking Mehru’s orders as his punishment and he is now ready to face this punishment for all his life. Aiza Khan and Danish Taimur’s performances are simply brilliant. Sania Saeed’s performance is also incredible in this episode.

The episode begins when Mehru is having a final talk with Shah Jahan. She clearly tells him that she is not going to marry him anyway and if he really loves her then he has to fulfill her wish. He has to marry Ayat. Shah Jahan pleads to her that he cannot do this because he always thinks of Ayat as his sister he cannot marry her. Mehru starts forcing him to marry her sister. It seems pathetic for a sister knowing that the person does not love her sister but still is forcing him to marry her, knowing that he will never be able to make her sister happy ever, makes no sense at all.

Shah Jahan on the other hand is too disturbed about Mehru’s demand for marrying Ayat. He knows that he has no choice but to agree as Mehru is giving him their love’s sake. He starts thinking that for him marrying Ayat is a kind of punishment for what he has unintentionally done with Mehru and for that he has to pay for the blunder he has unintentionally made. He makes up his mind to follow Mehru’s wish and will do as she is asking him to do. Knowingly that he will never be able to love Ayat the way he loves Mehru, he is still ready to ruin a girl’s life just to fulfill his lady love’s wish.

Mehru’s mother is the only sane person in this play. She knows that Ayat can never be happy in a forced relationship. She herself talks with Shah Jahan about him and Mehru’s relationship but Shah Jahan who has made his mind to marry Ayat for Mehru, simply denies in front of her that he has no such feelings for Mehru and that she is mistaken. He never likes Mehru in that way.

Mehru’s mother has understood that both Mehru and Shah Jahan is doing that for Ayat and that Shah Jahan is lying. She tells Shah Jahan that she will soon marry off Mehru before his and Ayat’s marriage. Shah Jahan’s disturbance is all overwritten on his face which Mehru’s mother can easily see. She also imparts this news to Mehru as well who is even more broken after hearing this sad news. She is sacrificing her love for her selfish sister.

tweet
Share on FacebookShare on TwitterShare on PinterestShare on Reddit
Rameeza NasimSeptember 7, 2020
the authorRameeza Nasim
Rameeza Nasim, a Paralian, passionate about poetry, drama and fiction. By giving drama critiques I feel like I am endorsing the writer's message to the audiences, I love my job. Being a critic responsibility lies on my shoulders to point out the flaws and shortcomings of the play be it on writer's , performers or director's end . I did my Masters in English Literature and Linguistics .
All posts byRameeza Nasim