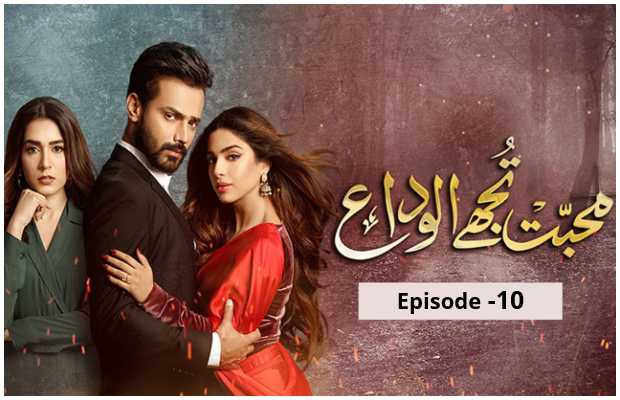 Mohabbat Tujhe Alvida airing at HUM TV is a play which moves around three main characters Shahaan (Zahid Ahmed) who is stuck between two wives and he is struggling hard to create a balance between the two, Ulfaat (Sonya Hussyn) the one who sells her husband for 15 Crores and Shafaq (Mansha Pasha) who purchases Shahaan’s love against 15 Crores. In this episode, we have seen that due to the change of attitude in Ulfaat, Shahaan is getting far from her and differences are growing between them.

Ulfaat and Shahaan go on a dinner date but that date ends up in a very loud argument. Shahaan tells Ulfaat that she is not the same girl he has fallen in love with on which Ulfaat snaps back by saying that Shahaan is just like an ordinary man who is envying his wife’s happiness. Shahaan is hurt and broken to hear Ulfaat’s views. It seems that differences are growing between them.

Shahaan is saddened by what Ulfaat has said to him, Shafaq asks him the reason, he tells her that how he passionately loves Ulfaat, she is his soul but now he feels like she is getting far from her. He tells her that the difference emerging between them is disturbing him badly. Shafaq offers him to give her a ride on a bike. Ulfaat is watching all this from her window she gets upset when he takes Shafaq on his bike.

Well Shafaq is too broken and sad to hear that Shahaan loves Ulfaat with that intensity. She knows that the love Shahaan has for her is not near what he feels for Ulfaat. After getting a long ride on the bike and having ice cream, she tells Shahaan to go to Ulfaat’s room and give her time. He knocks at Ulfaat’s room but she does not let him come into the room. Poor Shahaan spends the whole night on the couch in the lounge. Well, one wonders why he has not gone to Shafaq’s room? Ulfaat has seen Shahaan sleeping on the sofa in the lounge but she did not even try not to offer him to come back at her room.

The next day Shahaan is very upset and disturbed, he discusses with his colleague friend about the differences he starts having with Ulfaat and how he feels like he is losing her. Shahaan also tells his friend that he feels like Ulfaat has forced him to marry Shafaq because she is just impressed by Shafaq’s material status. Shahaan starts thinking that Ulfaat made him marry Shafaq might be for material gains. What will happen when he will get to know that Shafaq has given her 10 Crores for letting him marry her?

tweet
Share on FacebookShare on TwitterShare on PinterestShare on Reddit
Rameeza NasimOctober 22, 2020
the authorRameeza Nasim
Rameeza Nasim, a Paralian, passionate about poetry, drama and fiction. By giving drama critiques I feel like I am endorsing the writer's message to the audiences, I love my job. Being a critic responsibility lies on my shoulders to point out the flaws and shortcomings of the play be it on writer's , performers or director's end . I did my Masters in English Literature and Linguistics .
All posts byRameeza Nasim