Pehli Si Muhabbat Ep-33 Review: There is a Time Lapse of 8 years! 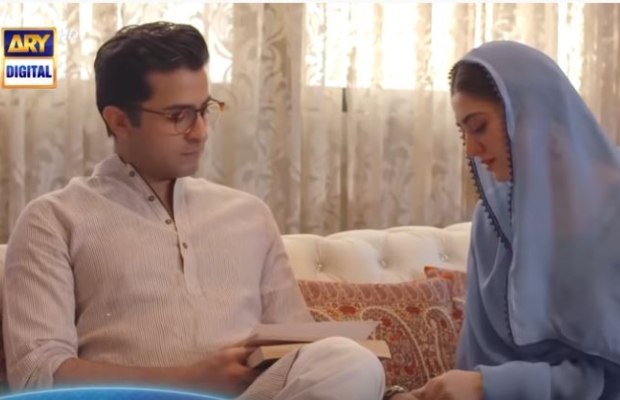 Pehli Si Muhabbat the drama serial airing at ARY Digital despite being too massively dragged has its strong points and beautiful moments, its dialogues are quite powerful. In the previous episode, Rakshi gets married to Arif and in the latest, we find that there is a time-lapse shown of 8 years in which Aslam is married to Bushra and he is a father of a 7-year-old daughter.

It seems that Rakshi has compromised well in this marriage and she is acting as if she is happy and we have seen that Zainab Appa’s ghost is guiding her all the time. Nargis when come to know about Zainab Appa talking with Rakhsi, she starts doubting Rakshi’s mental state, how come she is talking with a dead woman? Is she hallucinating?

Then there is a scene where Sikandar visits Akram’s house in presence of Muraad and he starts begging for forgiveness from all of them. Telling them that he is leaving this country forever and he also tells Muraad that he is begging forgiveness because he wronged Zainab by intervening in her happily married life, he tells him that her heart was then beating for Muraad only she did not love him anymore and it is he who was forcing her. It all gives Muraad an assurance that Zainab fails to give her in all her life.

Then there is a time-lapse of 8 years shown in the video where Aslam is married to Bushra and they have a cute daughter too. It seems that apparently Aslam has moved on too in his life but his heart still beats for Rakshi. He tries to avoid going to Hyderabad as the old neighborhood setting reminds him badly of Rakshi and he wants to get away from all those memories of her. He repeatedly suggests Akram move with him to Karachi.

Aslam and Bushra’s bond is also shown beautiful, they are an exemplary couple. Aslam tries to find an escape in her where she clearly knows what Aslam is going through she tells him that he has all the rights to revive her memories as missing her is not like as if he is cheating on her. Well, we want to see more of Rakshi and her husband’s scenes we have not shown much of Rakshi’s married life. Akram and Aslam’s mother has died between this time-lapse and Ahmed, their younger brother has grown up and has also fallen in love with a girl. This time Akram is all set to let his brother marry the girl he wants. The golden dialogue of this episode is said by Akram, “Bachon say apnay Haq se ziada nahi maangna chahiye” A powerful episode!

tweet
Share on FacebookShare on TwitterShare on PinterestShare on Reddit
Rameeza NasimSeptember 13, 2021
the authorRameeza Nasim
Rameeza Nasim, a Paralian, passionate about poetry, drama and fiction. By giving drama critiques I feel like I am endorsing the writer's message to the audiences, I love my job. Being a critic responsibility lies on my shoulders to point out the flaws and shortcomings of the play be it on writer's , performers or director's end . I did my Masters in English Literature and Linguistics .
All posts byRameeza Nasim