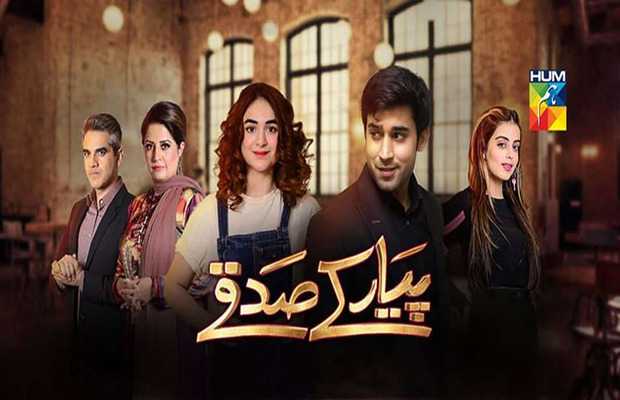 Pyar Ke Sadqay the drama serial airing at HUM TV is our most favorite Prime Time Watch for which we wait for the whole week. Casting, execution and script everything is so brilliantly done. The story of Abdullah and Mahjabeen takes a new turn when she gets pregnant, it seems like this baby is going to save their marriage quite a cliche turn. Yumna Zaidi and Bilal Abbas both have given their best performances in this episode.

Well we get to know that Mahjabeen gets pregnant we were wondering that when Abdullah and Mahjabeen had developed a physical relationship but then I remember on Shanzay’s Wedding night we have seen that they had not attending the function, instead they were shown romancing so from then we can assume that they have consummated their marriage. Well here Mahjabeen’s pregnancy news will create a crucial role as now Abdullah cannot divorce her and the baby will eventually going to save their marriage.

Washma when shares this news of Mahjabeen’s pregnancy with Abdullah, it takes him to another world of Fantasy where he starts looking at kids from another angle. He gets the news when he is stuck in shopping with Shanzay but his mind and soul are not present with him at the shopping mall along with Shanzay. the Mall. He is being so lost and restless that even Shanzay has noticed it. Well, here we wonder why a super-rich girl is shown selecting her bridal dress from a very mediocre store and not a designer shop.

Abdullah rushes to the hospital where Mahajabeen is admitted and there Washma tells him that she is his wife, his responsibility, Abdullah tells Washma that he is not going to divorce her. Washma leaves Mahjabeen at Abdullah’s care and there they both share another cute scene where through nurse Mahjabeen gets to know about her pregnancy and she says that she will name her child after her father. Abdullah is being extra caring with Mahjabeen, he takes her back to her mother’s house. He calls her and tells her that she can call her whenever she needs her help or whenever she is not feeling well, he will take her to the hospital. Abdullah has lied with Sarwar that he has divorced Mahjabeen and he is celebrating this news. Sarwar is such a low life that he even visits his ex-love interest Lalarukh Washma’s phupho in hope that she might help him but he faces disappointment. Washma is being super rude with her mother, actually she is being very honest with her showing her a mirror telling her that Sarwar is nothing for her but a mere addiction but here her mother admits by saying that yes he is an addiction and she cannot leave him as she cannot face the world. Washma tells her brother not to share anything about Mahjabeen’s pregnancy even with her mother.

tweet
Share on FacebookShare on TwitterShare on PinterestShare on Reddit
Rameeza NasimJuly 31, 2020
the authorRameeza Nasim
Rameeza Nasim, a Paralian, passionate about poetry, drama and fiction. By giving drama critiques I feel like I am endorsing the writer's message to the audiences, I love my job. Being a critic responsibility lies on my shoulders to point out the flaws and shortcomings of the play be it on writer's , performers or director's end . I did my Masters in English Literature and Linguistics .
All posts byRameeza Nasim