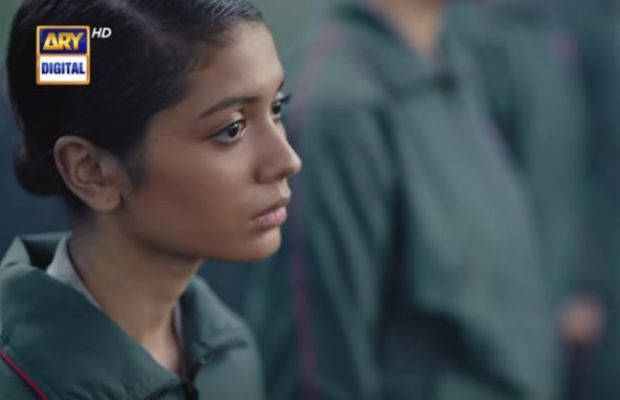 Sinf e Aahan the ISPR drama serial airing at ARY Digital is one of the most refreshing serials going on air. The ensemble cast has given brilliant performances. In the previous episode, PMA training had just begun. In this episode, it is shown that the girls are getting rough and tough through PMA training. In this episode, a whole day training routine has been portrayed.

The episode begins with girls running for a mile. It seems to be a harder exercise for the girls. Poor Pariwesh gets her ankle twisted, she is crying with pain. Nathmy gets for her help but she is instructed to join back the run and Pariwesh is asked to stand up and continue for the run as well. There is no room for crying in PMA.

Nathmy Perera outshines everyone in running. She gets appreciation from her superiors and the reason seems for a Srilankan girl to get on the top is especially because in Srilanka lots of efforts are put up for athletics training. That ” Sidra’s phool” scene is also super cute the way she gets punished for it. Rabia seems to be highly competitive and jealous, instead of applauding Nathmy as her colleague she is envying her and planning to beat her in running next time.

After the running session, the girls come back to change their uniforms, their uniform inspection has been done by Major Samia. Shaista is been praised for her uniform neatness. Girls also got a short tea break in which they have samosas. PMA actually gives samosas with tea looks cool!? It is good to see Pariwesh and Mahjabeen getting close and being friendly. Mahjabeen is not as an egoist and bratty as we were expecting her to be, she is nice and caring as compared to Rabia who seems to have serious attitude issues and she seems to lack empathy.

We have seen once again seen the family life of Major Osama and his wife, it seems that they have a backstory because they do not have a very warm and loving relationship. At the end of the episode, we have seen a scene that suggests that Major Osama’s wife was married before to most probably Major Osama’s friend who has embraced martyrdom. It is just an assumption that I get from the dialogues in that particular scene. In short a very refreshing episode, as usual, girls are getting stronger, and rough and tough through PMA’s strict training.

tweet
Share on FacebookShare on TwitterShare on PinterestShare on Reddit
Rameeza NasimJanuary 24, 2022
the authorRameeza Nasim
Rameeza Nasim, a Paralian, passionate about poetry, drama and fiction. By giving drama critiques I feel like I am endorsing the writer's message to the audiences, I love my job. Being a critic responsibility lies on my shoulders to point out the flaws and shortcomings of the play be it on writer's , performers or director's end . I did my Masters in English Literature and Linguistics .
All posts byRameeza Nasim